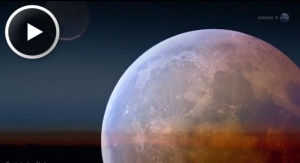 September 19, 2014 (San Diego)--On Wednesday morning, Oct. 8th, not long before sunrise, the bright full Moon over North America will turn a lovely shade of celestial red.  It's a lunar eclipse—visible from all parts of the USA.

"It promises to be a stunning sight, even from the most light polluted cities," says NASA's longtime eclipse expert Fred Espenak. "I encourage everyone, especially families with curious children, to go out and enjoy the event."

A new ScienceCast video examines the red and turquoise colors sky watchers can expect to see during the Oct. 8, 2014, total lunar eclipse. Play it

From the east coast of North America, totality begins at 6:25 am EDT.  The Moon will be hanging low over the western horizon, probably swollen by the famous Moon illusion into a seemingly-giant red orb, briefly visible before daybreak. West-coast observers are even better positioned. The Moon will be high in the sky as totality slowly plays out between 3:25 am and 4:24 am PDT.

During a lunar eclipse, the Moon passes deep inside the shadow of our planet, a location that bathes the the face of the Moon in a coppery light.

A quick trip to the Moon explains the color: Imagine yourself standing on a dusty lunar plain looking up at the sky. Overhead hangs Earth, nightside down, completely hiding the sun behind it. The eclipse is underway.

You might expect Earth seen in this way to be utterly dark, but it's not. The rim of the planet is on fire! As you scan your eye around Earth's circumference, you're seeing every sunrise and every sunset in the world, all of them, all at once. This incredible light beams into the heart of Earth's shadow, filling it with a coppery glow and transforming the Moon into a great red orb.

However, red is not the only color.  Many observers of lunar eclipses also report seeing a band of turquoise.

The source of the turquoise is ozone. Atmospheric scientist Richard Keen of the University of Colorado explains: "During a lunar eclipse, most of the light illuminating the moon passes through the stratosphere where it is reddened by scattering. However, light passing through the upper stratosphere penetrates the ozone layer, which absorbs red light and actually makes the passing light ray bluer." This can be seen, he says, as a soft blue fringe around the red core of Earth's shadow.

To catch the turquoise on Oct. 8th, he advises, "look during the first and last minutes of totality. The turquoise rim is best seen in binoculars or a small telescope."

The depth and hue of lunar eclipse colors depends a lot on the dustiness of the stratosphere.  When volcanoes erupt and chock the stratosphere with aerosols, lunar eclipses can turn such a deep red that the Moon looks almost black.  That's not the case this time, however:

"Despite some recent eruptions that look spectacular from the ground, there have been no large injections of volcanic gases into the stratosphere," says Keen. "In the absence of volcanic effects, I expect a rather normal reddish-orange lunar eclipse similar in appearance to last April's eclipse."

In other words, this is going to be good.

"Don't wait," he urges. Mark your calendar for October 8th, wake up early, and enjoy the show.