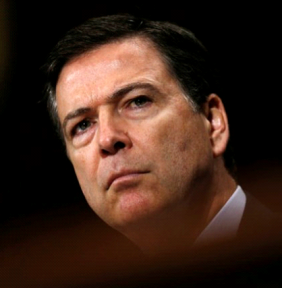 June 8, 2017 (Washington D.C.) – In riveting testimony to the Senate Intelligence Committee today,  fired FBI director James Comey confirmed that President Donald Trump  asked him in person and in phone calls to back off the investigation of National Security advisor Michael Flynn’s Russian ties.

Trump fired Comey after he refused to back off the investigation or swear a loyalty oath, promising "honesty" instead. Comey said Trump  then“chose to defame me—and more importantly, the FBI by saying the organization was in disarray and that it was poorly led, that the workforce had lost confidence in its leader. Those were lies, plain and simple.”

Acting FBI director Andrew McCabe backed Comey in his recent testimony , stating,“Director Comey enjoyed broad support within the FBI and still does to this day,” adding that Russia probe is “significant.”

Comey said Russia targeted “hundreds” of targets, perhaps over a thousand, for cyber intrusion in the U.S. including massive spear phishing campaigns in an effort to disrupt the election, but said he has seen no evidence that election outcomes were actually changed. ( On certain voting systems however hacks can be impossible to detect after the fact due to software programmed to erase changes of vote flips, as this reporter’s past national-award winning investigation has reported.)

But Comey also revealed that contrary to some media reports,  he did confirm to Trump that he was not personally under investigation at that time, but refused pressure from Trump to state this publicly since the probe could lead to investigation of the president directly and Comey sought to avoid having to issue a later correction should that occur.  Comey also indicated that Trump’s conduct fell within “the scope of” the FBI’s investigation.

Comey, who has worked for both Republican President George Bush and Democratic President Barack Obama, said he never felt a need to take notes after meeting with them but did with Trump because he believed Trump might “lie” about what transpired, he told the committee.  Comey also revealed that he arranged to leak his memos to the media in hopes it would result in appointment of a special prosecutor. He also said he has turned over all of his memos to newly appointed special prosecutor Robert Mueller.

The former FBI director further attested that he asked Attorney General Jeff Sessions to intervene and halt any further private meetings with the President to  prevent efforts by Trump to suppress the investigation, but that Sessions did not comply with that request. His testimony also raised questions about whether Sessions has fully stayed out of the investigation after recusing himself, since Sessions was untruthful in his own Senate confirmation hearing about past meetings with a Russian official.

Trump had earlier indicated he would be live-tweeting responses to Comey’s testimony, but did not.  His personal attorney Marc Kawitz, did issue a statement afterwards  affirming that Comey “confirmed publicly what he repeatedly told the President privately: the President was not under investigation as part of any probe into Russian interference. He also admitted that there is no evidence that a single vote changed as a result of any Russian interference.

Comey revealed that a New York Times report published inaccurate material alleging intelligence documenting collusion between multiple Trump campaign operatives and Russia. While it remains for the investigation to determine whether any Trump campaign representatives knew of or colluded with Russia to hack or influence the election outcome, Comey did make clear that there is "no fuzz here" on the clarity of proof that Russia did make hundreds of aggressive efforts to electronically tamper with the election.

What's not clear is why the President has continued to denounce all reports on Russian election hacking efforts as "fake news" insteading of showing serious concern to invsetigate the Russian tamperig efforts and prevent such hacks in the future.

The attorney says Trump has flatly denied asking for a loyalty pledge and further criticized Comey for leaking memos to the press claiming these were privileged, though Comey asserts that his own personal memos were his property and contained no privileged information.

Chairman Richard Burr (R-north Carolina) peppered Comey with questions over whether he had any doubt that Russians were behind cyberintrusion into state voter files and a break in at the Democratic headquarters (a cyberversion of Watergate) and if the Russian government was fully aware of these actions.

Comey stated he had no doubts that all of these things are true.

Burr also asked whether it’s possible that criminality, collusion and coordination with Russians on non-election issues might become part of the investigation, and Comey said this is possible.

Burr also questioned Comey on his handling of the Clinton email investigation .

House Speaker Paul Ryan, a Republican, suggested that since the President is new to government perhaps he simply didn’t know that a separation should be maintained between the President, Justice Department and FBI to avoid the appearance of obstructing justice.

That argument, however, is weakened by Trump’s past criticism of Obama’s Attorney General, Lorretta Lynch, speaking briefly with ex-President Bill Clinton at an airport during the investigation into Hillary Clinton’s emails. Trump apparently understood then that private meetings between federal investigators and those who may be involved in their investigations should be avoided, along with any appearance of a conflict of interest or pressure to sway or drop an investigation.

Obstruction of justice was among the articles of impeachment drafted to remove Richard Nixon, who resigned from the presidency to avoid impeachment.

The Senate intelligence committee’s Vice Chair Mark Warner (D-Virginia) called Comey’s firing “shocking” and questioned why Trump has shown an “unexplained affection for Russian dictator Vladimir Putin and voiced dismay at Trump referring to Comey, in a meeting with Russians,  as a “nut job” while telling the Russians that Comey’s firing took “great pressure off” the President in his dealings with Russia.

Warner concluded,  “This is not a witch hunt. This is not fake news.  It is an effort to protect our country from a new threat that quite honestly will not go away anytime soon.”

Analysis: 7 takeaways from Comey’s extraordinary testimony about what Trump told him to do:

All that's clear to me is there are too many unanswered questions that those in the know are unwilling or unable to answer at this time. As to who is lying, I think it's important to know. Hope there are tapes! It would sure put the question of honesty and character to rest in short order!

When Trump stated that Comey better hope there aren't tapes of their conversation, Comey, after being fired, then went on the assumption there was tapes of their conversations. Comey has clearly put everything on the line. Does a man with his long record, expertise, and experience do something like this without knowing the potential consequences? He obviously is prepared to accept them. Has he done this for a good reason? I think we will soon find out.