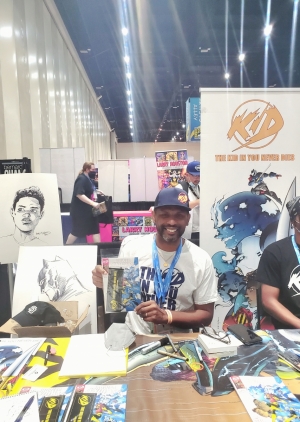 (Photo at left of Keithan Jones by Rebecca Jefferis Williamson)

He displayed his work, a comic book series titled “Power Knights,” at a booth in Artist Alley in the San Diego Convention Center. Additionally, he appeared on several panels, did multiple interviews, and greeted fans, attendees, and friends during the run of Comic-Con 2022.

How did he get to that celebrated spot? Talent and recognition by an elementary school teacher.

Jones credits his sixth-grade teacher at Los Altos Elementary School, in San Diego, with changing his path as an artist. She asked a life-changing question about what he would want.

“My comic book printed,” he responded as he retold the experience during an interview at Comic-Con. “My teacher knew a local printer and she had him make a copy and print it.” This proved to be a building block to his future.

Skip to the present time; witness and read his Power Knights comic book series featuring an African American hero and characters, which is just a part of his artistic outpouring. In an excerpt from Jones’ Facebook page, he described the basis of his Power Knights’ characters: “Many characters populate the world of the Power Knights. I wanted to keep it grounded by focusing on two brothers whose relationship is tested in many ways, when they are thrown into a war between ultra-powerful beings. You'll find science fiction, fantasy, and love in the pages...," he wrote.

Besides founding his company KID (the Kid In you never Dies) which produces his comic books and other products, he spring-boarded into animation after a friend of his, Bobbie Rubio, an accomplished artist, at Pixar, shepherded him, based on his talent and track record, into working as an artist on animated projects.

Currently, he has been picked up by a Canadian company, Vortex Comics, and is working on the dark fantasy Chaos Breaker series.