April 1, 2013 (La Mesa)--The Cushman family, owners of Grossmont Center, announced yesterday that the La Mesa Planning Commission has approved plans to revive  La Mesa's historic Flying A Studio as part of their redevelopment plans when the shopping center's lease runs out . The ambitious redevelopment plans combine the movie studio with an amusement theme park that reflects our region’s heritage.  The new development is slated to open to the public for studio tours and amusement park rides in spring 2016.

The first film to be produced at the studio will be Mayberry: The Movie.  Jim Nabors, who played Gomer Pyle in the original TV series, will cut the opening ribbon at Goober's Grub Cafe to be located in the theme park.

“Golly, there ain’t no place more like Mayberry than La Mesa!”  exclaimed Pyle, producer of the project, adding that some scenes will be shot on location in La Mesa’s quaint downtown village.

Flying A Adventure Park  has agreed to purchase and relocate the city's historic Spring House, now slated for demolition, from Collier Park to an eating area outside Goober's Café.  There, be an interactive fountain will allow children to frolic while their parents relax.

Honoring our region’s aerospace industry, a supersonic roller coaster, the first roller coaster ever designed to break the sound barrier, will be called the "Flying A.” 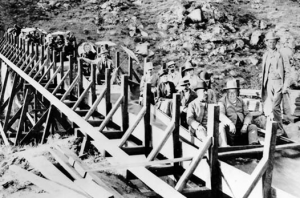 “Cuyamaca Flume,” a water ride patterned after  the early water transportation system in East County, will start atop of Mt. Helix and swoosh down to where the vacated Target garden center now stands.  From there, guests  exiting the log ride will be able to begin the studio tour in a soundstage slated to occupy the existing Wal-Mart building.  Film showings will be presented in the existing movie theater at the heart of the project.

James Newland of the La Mesa Historical society was ecstatic over the park's historical theme.  "I am especially grateful to Flying A for agreeing to underwrite the rescue and preservation of our historic Spring House for future generations to enjoy and learn about our city's past," the historian said.

Mary England and the La Mesa Chamber of Commerce have begun lobbying the Flying A’s to build an 18-story hotel similar to the Disneyland Hotel, with a circular, rotating convention center at the top complete with ocean views. Three levels of underground parking will be built underneath the hotel and convention center.  “This will be a tremendous boost for tourism and a huge benefit to local businesses,” said England, the Chamber president, who also suggested  installing a sky tram to  zoom guests across La Mesa to festivals and shopping in the downtown village.

Arcade games and an indoor runaway mine train ride, reflecting East County’s gold mining past, will occupy the former Macy’s site.  As a gift to the people of La Mesa, which has had difficulties finding a community garden site, the arcade/mine train building will feature a rooftop community garden and aquaponics center.

Neighborhood activists challenged the Planning Commission’s action. However Council members Christine Alessio and Ruth Sterling were able to convince Councilman Mark Arapostathis to join them in upholding the Planning Commission’s decision on a 3-0 vote, while Mayor Art Madrid and Councilman Ernie Ewin were out of town attending a seminar on Congeniality in the Workplace.

“This presents a great opportunity for kids in Peter Pan Junior Theater to audition for movie productions at the studio,” Arapostathos, a theater instructor, said as he cast the decisive vote.

After the meeting,  Sterling and Alessio exchanged a high five and chanted, "Girls Rule!"

Ewin later expressed his hopes that the missing La Mesa softball might turn up when ground is broken for the project.

Madrid told ECM that he has issued a proclamation declaring the Flying A site an official Fair Trade zone.