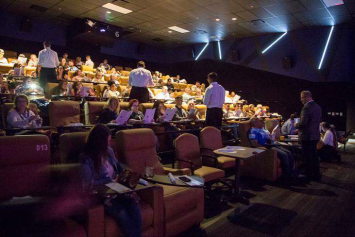 November 16, 2018 (Santee)--Santee is finally getting an indoor movie theater, and another restaurant to go with it.

The long-awaited project that was a top priority of elected officials and most of the city’s candidates is slated to become a reality following unanimous approval of a contract by the Santee City Council Nov. 14.

The council voted 5-0 to enter into a development agreement with Eneract LLC to build a multi-screen movie theater and restaurant that will be operated by Studio Movie Grill, a Dallas-based private company that pioneered the dine-in cinema concept starting in the 1990s.

“This is going to be a really cool project,” said Joe Harberg, partner in the development firm that works exclusively for Studio Movie Grill. He said the Santee project will cost about $17 million, much of which will be spent preparing the 7-acre parcel just north of Trolley Town Square and off Cuyamaca Street for construction.

Harberg said San Diego County, the land’s previous owner,  tried several times to create a theater complex at the site but failed, mainly because of all the money it would take for grading, utilities installation and permits before building. Several years ago, the county sold the parcel to Santee for $1.

Last year in October, Santee entered into an agreement with another developer, Kimco Realty Corp., and operator, Cinemark, to build a similar combined theater and restaurant, but the deal fell through. That prompted the city to reach out to the runners up, and negotiations began in February.

The agreement calls for the creation of at least nine theaters but possibly 12, along with an upscale restaurant that both serves movie-goers, and the public. The plan also provides for a second restaurant that would be operated by a separate company, Harberg said.

Construction is expected to begin soon after escrow closes, and completed within 18 months, said Elizabeth Hall, of Best, Best, & Krieger, advisers to the city.

Harberg told the council the restaurant will have a nice outside patio bar that would be open year-round. The theater seats will be luxury recliners and come with a tray to accommodate the food and drink, with a button to press if a patron wants something else.

As to concerns by some that dining could distract from the movie viewing, Harberg said that wouldn’t be a problem.

“You really don’t notice it,” he said. “The waiters and waitresses are dressed in black, they’re trained to keep low when they’re serving you so they don’t block your view.” 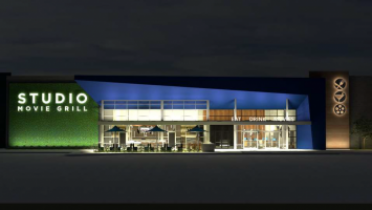 And most customers come early, arrive about 30 minutes before the show, order their meals, and consume what they’ve ordered within 20 minutes, so they aren’t eating during the film screening, Harberg said.

The menu can be classified as moderate with most entrees in the $12 to $15 range. Drink prices weren’t disclosed on the website.

Santee has a drive-in movie theater on Woodside Avenue, one of the last remaining in the state, but hasn’t had an indoor movie house since 2000 when the AMC Santee Village 8 in the Vons Shopping Center on Mission Gorge Avenue closed. Many residents said getting a new theater was something they wanted to see. Currently the closest indoor cinemas are in El Cajon and La Mesa.

Studio Movie Grill recently acquired three movie theaters in Redlands, Monrovia and Downey, and is converting them into combined theaters and restaurants. According to the company’s website, www.studiomoviegrill.com, the Downey location was hiring 200 employees, including cooks, prep cooks, and wait staffers.

Other California locations are Bakersfield, Sacramento and Simi Valley.

The company’s site said it has 30 locations in nine states. Last year the company struck licensing deals for locations in Saudi Arabia and South Africa. This year, Studio Movie Grill made the Inc. Magazine Top 5000 Fastest Growing Private Companies List, reporting it had revenue of $211.7 million in 2017, and a 68 percent three-year growth rate.

Councilman Ronn Hall, who was recently elected to another four-year term, alluded to what were apparently some lengthy negotiations with SMG, and noted that they were not the first choice to develop the site. But several other councilmen seemed thrilled about the prospect of the city finally getting an indoor theater developed by SMG.

“A lot of people in East County shop here, and we’re looking forward to having the best restaurant in Santee,” said Councilman Brian Jones, who was just elected to the State Senate.

“I personally can’t wait for this to happen,” Mayor John Minto declared.