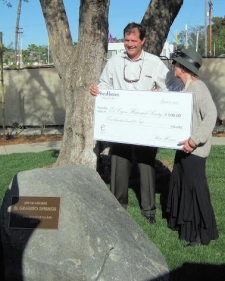 April 16, 2015 (El Cajon )--The boulder and brass plaque requested by the El Cajon Historical Society honors the ten thousand years or more that El Granito’s spring waters were used by tribes of local and far-flung Indian nations traveling between the desert and the Pacific Ocean shores. 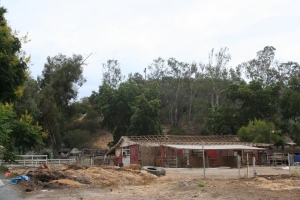 Given the name El Granito Springs by Spanish explorers, its steady flow was catalogued in a 1906 U.S. Army Engineers’ report on California’s waterways. By then, it had been settled by an American who built a large adobe room near its banks. In it, he cured olives picked from local trees possibly planted during San Diego’s mission era. The Springs would continue flowing until hampered by the original paving of Avocado Boulevard. Widening of the boulevard in the Seventies would stop them entirely. By then, a wooden house had been built by later owners. In 1985, that house was identified as historic in SANDAG’s 1985 publication of the Historic Preserve Inventory of El Cajon Buildings.

Also on the property were ranch buildings. Among them was a barn still used until the last few years by the last owners as a horse stable for their riding school. Other facilities housed ducks, chickens, goats, a reindeer and a one-humped camel named “Jasmine.” For decades, people heading south on Avocado passed the ranch just as the road began its uphill climb to Fuerte Drive or straight ahead to Freeway 94. In those brief moments was when many passers-by sought glimpses of the exotic Jasmine and the just-as unlikely reindeer. However, following the recent sale of the property to SheaHomes, Jasmine and the reindeer moved with their owners to a new home on the Washington/Oregon border.

In 2014, the decrepit ranch buildings and house were razed and the first of Everly Homes were built. As a private community, this new community is not open to the public. However, although the family, their animals and the old buildings are no longer there, as the boulevard begins its rise up from the valley floor, drivers and passengers have a marvelous view of the massive granite formations from which this part of the valley’s southern flank of Mt. Helix was formed.