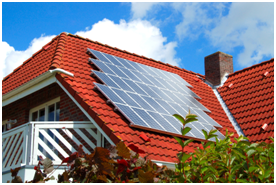 Photo: A community choice energy option would give residents an option to buy electrical power from the county instead of from SDG&E. Many Lakeside residents objected to SDG&E’s construction of  Sunrise Powerlink high-voltage lines through scenic areas such as the El Capitan reservoir (photo, left)  and El Monte Valley in Lakeside.  CCA plans also enable local governments to provide power from clean, renewable resources such as solar The electricity would still flow through powerlines and infrastructure maintained by SDG&E, but profits off energy production would flow to the county to benefit taxpayers, not SDG&E shareholders.

August 1, 2019 (Lakeside) - That the county is on the verge of declaring a community choice aggregate (CCA) appears evident, given the tenor of a recent forum held at the Lakeside Community Center July 30. Under the CCA, the county would buy and sell electrical power to residents and businesses, providing an alternative for consumers to SDG&E. The board is scheduled to receive a final report on the issue Sept. 10, and take a vote either then or soon after.

The county may consider joining forces with the city of San Diego and several other cities to form a joint powers authority CCA which could reduce costs even further.

Back in February, County Supervisor Dianne Jacob, who represents East County, called on her fellow board members to look at establishing a community choice aggregation entity for the unincorporated area--a relatively new construct that could reduce rates for customers while obtaining a larger share of power from renewable sources such as solar and wind.

The board agreed, and the process of due diligence is in its final phases, with hired consultants now holding public forums to inform and solicit ideas about how such a CCA should be operated.

Should the power mix derived from renewable sources be 50 percent at launch or 100 percent, or should it simply keep track with San Diego Gas & Electric, which is now at 45 percent and climbing?

Lakeside residents have in the past staged protests against SDG&E over the state’s approval of Sunrise Powerlink in the community. There was even a protest song that began:

Well you can take my hand and together we will stand

Arm in arm against the towers that threaten our forest land

And when united voices shout “We won’t let you burn us out!”

Then together we’ll defeat this shameful plan.

The utility later paid a hefty state fine for failing to notify Lakeside’s planning group when the route was changed to put the high-voltage lines through scenic El Monte Valley. Lakeside also had many homes burn in the 2007 Witch Creek fire sparked by SDG&E equipment. 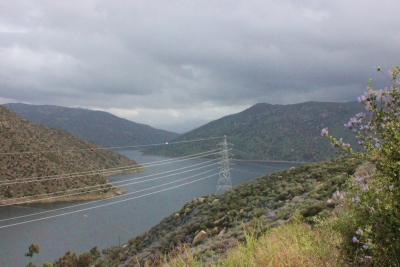 So it is surprising that only a dozen people turned out at the county’s forum in Lakeside (one of several held around the region) on the potential for the county to buy and sell electrical power to residents as an alternative to SDG&E.

Nearly all of the attendees listening to the Lakeside presentation said they already knew what a CCA was, and several were wearing T shirts with the logo “San Diego 350,” a nonprofit that advocates for a variety of climate change issues locally and throughout the state.

One man wearing the 350 shirt said it was important for any CCA to give customers the option to choose that 100 percent of their power come from renewable sources. A woman sitting in the front row said even if that option cost more (presumably more than SDG&E’s rate) it would be worth it.

Howard Choy, senior associate with EES Consulting Inc. of Kirkland, Washington., the county’s contracted expert, set the stage for the meeting by asking whether the revenue generated by the CCA could be sufficient to cover all its costs while still offering rates that are comparable to or below those offered by SDG&E.

All the data and graphs presented points to the conclusion that a CCA for the county is feasible, Choy said. Among the biggest reasons why CCAs are successful in the state (there are 19 now operating) is once a government agency forms one, all customers are automatically enrolled. They can opt out of the arrangement and remain with SDG&E if they desire, usually within a 60 day period, but the overwhelming majority prefer to stick with CCAs, Choy said.

If the county government wants to get to the goal of having 90 percent of renewable derived energy by 2030 as San Diego did as part of its climate action plan adopted last year, then a CCA is the way to go, Choy said.

“There is no way you get to that (goal) without a CCA,” he said. “There are some other ways to get to it but a CCA is certainly the most viable.”

Among the risks and uncertainties associated with any CCA are SDG&E decreasing its rates to the point that customers move back; the costs of power contracts for renewables and other energy increasing; and financial--start up costs running too high.

Choy had answers: create a rate stabilization fund to offset SDG&E’s lower rates; if green power is costing more SDG&E will have to pay as well; go to a lender for the money needed to launch, and buy power contracts.

Asked how the ongoing adoption of solar panels might impact a CCA, Choy said that it could reduce revenue, but a system of buying excess power would create more opportunities and allow more local control over power allocation than what is currently allowed with SDG&E, or other investor owned utilities.

Another big benefit for a CCA is taking the profits it generates (the presentation says that should be a minimum of 2 percent) and putting it into such discretionary programs as new electric charging stations, more incentives for solar panels, and discounts for low income customers.

Choy was presented with a recent news story of a significant exodus of customers at the Clean Power Alliance, encompassing Los Angeles and Ventura counties and the largest CCA in the state with some 1 million customers.

Reports in LA- based papers said some customers were unhappy with the higher rates and reliability provided by the Clean Power Alliance and returned to Southern California Edison. Choy said while he wasn’t that aware of the full story, he believed the CCA solicited for too much load, and probably didn’t get the prices they were predicting, hence the defections back to SoCalGas.

Charley Marchesano, an associate with San Diego County’s energy and sustainability division who was part of the presentation, said the activity points up the need for a stabilization fund to make up for unforeseen financial dips. “The way to mitigate risk is to make sure your pricing is lower than the utilities’ (prices),” he said.

It also underscores the fact that all CCAs will face uncertainties and unknown risks. “These are real things, these are real risks,” Marchesano stated.