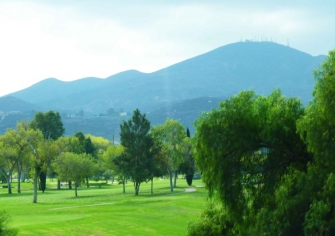 File photo: Cottonwood Golf Course, site of the proposed sand mine along the Sweetwater River

March 7, 2022 (Rancho San Diego) – Several community groups have sent letters to the county sharply criticizing the draft EIR on the proposal for a controversial 10-year open pit sand mining operation proposed on the site of the Cottonwood Golf Course.  Groups providing detailed comments on the inadequacy of the report include the Sycuan Band of the Kumeyaay Nation, the Sierra Club, the Valle de Oro Community Planning Group and Stop Cottonwood Sand Mine, a coalition of concerned residents.

As the February 28 deadline approached to provide input to the County of San Diego, dozens of residents and organizations sent comments of concern and opposition, including detailed analysis of the EIR document by several groups.

Here are excerpts of some of the comments:

"The Project as proposed will have significant, adverse impacts on both the natural and the human environment in San Diego County. These impacts include, but are not limited to, potentially devastating effects on: local hydrology and water quality, habitat for both terrestrial and aquatic wildlife, local traffic, air quality, and noise.

"In addition, the Project is inconsistent with the San Diego County Multiple Species Conservation Program (“MSCP”). But none of these impacts or inconsistencies of the Project can be discerned from reading the DEIR. With regard to each of CEQA’s substantive requirements – a complete and stable project description, a thorough analysis of significant impacts, identification of feasible and enforceable mitigation measures, an analysis of a reasonable range of alternatives – the DEIR falls woefully short.

"As a result, the DEIR fails to meet CEQA’s fundamental purpose of providing disclosure to the public of the Project’s environmental effects. The County and the applicant need to start over –beginning with revised Project objectives that allow for consideration of a reasonable range of alternatives that would be consistent with the General Plan – and prepare and recirculate a new, legally adequate DEIR."  --Shute, Mihaky & Weinberger LLP, attorneys for the San Diego Sierra Club Chapter, in a 206-page response

"(Sycuan) submits comments in opposition to this proposed project and expresses its deep disappointment in the flawed, inaccurate, and incomplete draft environmental impact analysis. The county's DEIR fails to recognize that the Project impacts will completely obliterate all cultural resources currently on the site, causing irreparable harm to the sensitive cultural landscape and threatening the erasure of much of our history and current day connection to this place as Kumeyaay people.

"Further, we are deeply disappointed that the County believes these irreparable harms can be 'mitigated' by providing speculative plans to monitor (witness) their destruction. Monitoring and witnessing the unnecessary removal and destruction of culturally sensitive resources is not mitigation, and is contrary to the protections provided by CEQA." --Sycuan Band of the Kumeyaay Nation, in a 49-page letter

"The Valle de Oro Community Planning Group opposes development that is incompatible with our community plan, established land uses, and existing quality of life. We oppose projects that carry high potential to reduce quality of life, increase health risks, and reduce economic stability of our properties.

"The draft EIR concludes that there would be significant, unmitigable aesthetic impacts, but determines that all other impacts are mitigable to a less than significant level. Several impacts and key areas of analysis were neglected. In several cases the analysis was not provided because the project would be complying with laws and plans. Compliance with laws and plans does not ensure that there are not significant impacts. There must be a case-by-case consideration, especially when assessing something as uniquely problematic as a sand mine. When plans are deferred until after certification of the EIR, such as development of the Cultural Resources Treatment Agreement and Preservation Plan, it is impossible to determine if the plan adequately mitigates the impact." --Elizabeth Urquhart, Chair, StopStopCottonwoodSandMine.org, 37-page letter

Several other letters can be found here:

Following release of the document, the StopCottonwoodSandMine.org Board of Directors called for input from the community and reiterated the significant concerns raised by area residents over the proposal.

The Cottonwood sand mine is proposed by New West Investment and investor Michael Schlesinger, who purchased Cottonwood Golf Course in 2015, four years after the golf course filed for Chapter 11 bankruptcy. As originally filed, the proposal is to mine 4.7 million cubic yards with approximately 3.8 million cubic yards (5.7 million tons) of construction aggregate produced over ten years, in phases with reclamation planned after each phase. Approximately 214 acres of the approximately 280-acre site are proposed for extractive use which would occur in a total of four phases. The project application was filed in November 2018.

The developer contends that the sand is needed to supply construction and road-building projects in our region, reducing the need for costly imported sand.

In the case of the Major Use Permit sought by the developer, the detailed list of requirements previously released by the County underscores concerns expressed by the community regarding a long-term mine along the Sweetwater River, most notably in the middle of an established residential neighborhood surrounded by homes, schools and businesses.

Those concerns, include traffic, safety and noise, health hazards, impacts on the environment and decreased property values.