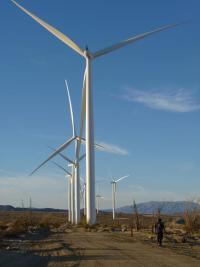 January 17, 2013 (Boulevard) – Two nonprofit groups, Protect Our Communities Foundation and Backcountry Against Dumps, will convene a community meeting Thursday, January 24, 2013 to inform residents about planned industrial conversation of Boulevard and surrounding areas.  A dozen or so big energy corporations—most from outside the region--seek to push through zoning changes to allow massive projects that would forever transform this now-rural area.

“Learn about the many industrial scale wind, solar, and related transmission line projects planned in and around our residential neighborhoods (on public, private, and tribal lands), adversely impacting many homes,” a flyer for the event states, “and what you can do to help protect and defend your family, your property, your future.”

The meeting will be held at the Boulevard Fire Station Equipment Bay, 39923 Ribbonwood Road, Boulevard 91905 (northeast corner of Old Highway 80 and Ribbonwood Road) from 7 to 9 p.m. on January 24.

Federal and state initiatives to curb global warming have led to fast-tracking of projects and designations of some areas as energy zones, including the southeast portion of East County.  But the projects pose many serious concerns, including the following items listed by the nonprofit groups organizing the event:

For more information: Contact Donna Tisdale at 619-766-4170 or tisdale.donna@gmail.com Donations to fund efforts by the nonprofits, which have fought past projects in court, can be sent to BAD, PO Box 1275, Boulevard, CA 91905

"O" devoted most of his second inaugural blather to government's role in fighting global warming. That means primarily one thing: "Alternative energy"--i.e., wind and solar farms. Hundreds of thousands--millions--of acres are slated for destruction.

Regardless of how one feels about wind energy lying about turbine impacts should not be part of the process. It stops the public from making informed decisions.

Here is something else everyone needs to know. Besides hiding their bird and bat mortality, the industry is also hiding their plans to put in over a million more wind turbines across North America.  Get ready for a lot more turbines.

For anyone that has ever been to the Palm Springs or the Tehachapi wind resource areas, then you have an idea of the industrial ruination that is coming.

But even with another million more turbines, it will still not be enough to run this country