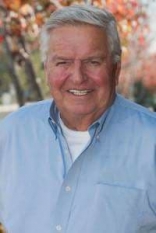 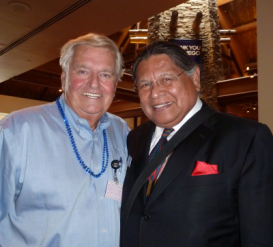 Hansen served as Vice President of community relations for the Viejas band of the Kumeyaay nation until his retirement in 2011, at age 76. At Viejas as the tribe grew from impoverishment to prosperity as a business powerhouse, Hansen oversaw the tribe’s charitable endeavors that benefited countless good causes throughout the region, from Stoney’s Kids to our own East County Wildfire & Emergency Alerts. (Photo, right, by Miriam Raftery: Chuck Hansen with Viejas Chairman Anthony Pico.)

Before joining Viejas, he worked for PSA Airlines, for Atlas Travel, and as Director of the America’s Cup Task Force in San Diego. He has served on many local boards of directors including the Holiday Bowl, San Diego Convention and Visitors Bureau, and San Diego East Chamber of Commerce.

He was active with the Chamber for over 20 years, serving on its board of directors, helping develop the Chamber’s travel and leadership programs. He also served as an ambassador with officials and as liaison to the community. 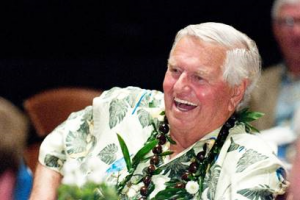 “His years of dedication and hard work will continue to survive him for years to come,” says Lund, who provided the photo (left) of Hansen.

Scott Alevy, former chair of the San Diego East County Chamber, said upon hearing of Hansen’s passing, “Some shoes simply can’t be filed and Chuck’s passing leaves a hole in our hearts that can’t be filled, either. Going back to our time together at PSA in 1978, he has been a friend and mentor.”

Robert Scheid, former Vice President of community relations for Viejas, recalls that Hanson “built the department from the ground up” at Viejas Community relations, adding, “I had some very huge shoes to fill after Chuck’s retirement. Chuck served Viejas, and the community at large, very well and had a lasting impact.” 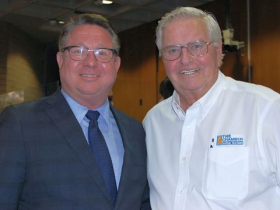 Hansen was named Citizen of the Year in 2015 by the City of El Cajon, where the city’s public relations officer Monica Zech recalls Hansen as a “wonderful friend and mentor” who “loved our City and put his heart and soul into everything he did.”  She sent this photo of Hansen with Mayor Bill Wells, taken on December 12, 2017, the last meeting before Hansen's passing. 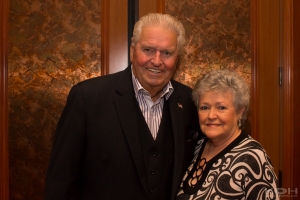 Hansen is survived by his wife, Dorothy, of Granite Hills, the El Cajon neighborhood where they lived for many years. (photo, left, by Tariq Koh.)