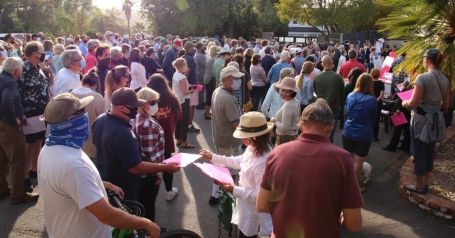 In their efforts to oppose the placement of two SVPs in their community, the GMIA submitted a letter expressing its concerns to San Diego Sheriff’s Office, California Department of State Hospitals, and to the San Diego District Attorney.

Local residents Sarah Thompson and Amy Sago, whose families (including young children) both live near to the house proposed for the sexually violent predators, organized the event.

“I first heard about this late at night on a news station, and was completely shocked. I couldn’t sleep for the rest of the night,” said Thompson. “The next morning, I texted my neighbor, and went right into immediate planning panic mode!”

“Right now, the dates we have to worry about are getting all of our letters and emails into the San Diego Sheriff’s website by April 9,” continued Thompson. “They are having their Zoom “court hearing” on April 20, and that is going to be a very important day because the more people that we have logged onto Zoom watching, the better. It shows the Judge that we’ve got a huge strength in opposing this.” 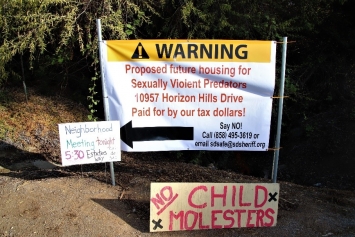 Thompson continued, “We’ve also now learned that there’s going to be another SVP placed in that home, which we discovered on Friday. It’s a large house.”

Sago added, “It’s going to be one after another. That’s our fear.”

“There are still three or four more bedrooms in that house. So, we’re fearful that that’s going to be packed full,” said Thompson.

Merle Wade Wakefield, the second SVP proposed for placement at the same site, was convicted of felony rape in 1990 and of a lewd and lascivious act with a child under 14 in 1981.  He served time in state prison and was found in1998 to be a sexually violent predator. He has repeatedly been confined to a state hospital for treatment as a sex offender but in Dec. 2020, a judge granted his petition for conditional release.  His public placement hearing is set for May 10 at 9 a.m. via Zoom: https://sd1502.zoom.us/j/89983572692

“They’re diagnosed as Sexually Violent Predators, which is completely different, much more harmful, than a “regular” sex offender. It means that they have been diagnosed likely to reoffend, by the Department of Health, and also by DA (District Attorney),” stated Thompson.

Because of the mental illnesses that Badger specifically has, schizophrenia and sexual sadism (a desire to hurt others), he’s considered “high risk and likely to reoffend,” shared Sago. “He’s served five prison sentences and has already violated parole three different times. So, how do we not know that’s not going to happen again? We don’t want that to be one of our children. It can happen in any neighborhood.”

Thompson and Sago then addressed the crowd or more than 200 local residents.

“He’s getting released no matter what,” said Thompson. “they’re just trying to figure out where he’s gonna go.” 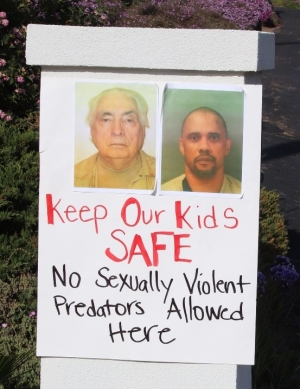 “After we found that out on Friday, we learned that a second sexually violent predator was going to be released into the same home…Once they get them in, it’s going to be so much harder for us to get them out.”

Thompson then shared multiple reasons why this residence is unsuitable to place any known criminal, much less a sexually violent predator. “The streets have no street lights, so at night it’s dark. Nobody is going to feel safe walking up and down the neighborhood. There are no bus stops anywhere nearby. How are these guys going to get anywhere? There’s no public transportation. Are they planning on walking through our neighborhood?”

Liberty Healthcare is in charge of  monitoring these men. But Thompson states,"Liberty healthcare has not given us any idea on how they’re going to be monitoring these guys. In fact, we haven’t even heard from them. We can’t get ahold of them. I don’t even know if they exist.”

KUSI reported in Feb.2020 that the District Attorney indicated Liberty Healthcare failed to follow terms of release for a predator released in Campo,  who did not register with law enforcement every 90 days as mandated by state law.

Multiple political officials have also lent their support to the community in opposition to settling the sexually violent predators in the community.

County Supervisor Joel Anderson (Second District), who was unable to attend personally because the Board of Supervisors had its meeting at the same time, submitted a letter to Judge Theodore Weathers, the judge presiding over the placement of the sexually violent predators, stating his opposition to the move.

In his letter, Supervisor Anderson stated, “It is unfair and inequitable for East County, home to several disadvantaged communities who are financially least prepared to protect themselves, to be repeatedly targeted by the court as a dumping ground for the region’s Sexually Violent Predators.”

State Senator Brian Jones (38th Senate District) also voiced his support for the community and submitted his letter of objection to Ms. Stephanie Clendenin, Director, California Department of State Hospitals. Senator Jones’s letter references Mr. Badger’s many repeated offenses and denials for prior release based on his criminal behavior.

Bill Wells, Mayor for the city of El Cajon, was in attendance at the event. “This is in the county but close to our city. I worry about the kids who live here and the kids who live in our community, and I think this is a very inappropriate place for the placement of this offender,” stated Mayor Wells. “Somebody is going to get hurt.”

Mayor Wells went onto say that “the county is larger than just East County. If we need to bring people back into the community, there’s a South, a West and a North as well, besides the East. But frankly, a person like this shouldn’t be in any of those communities. They should be in a locked psychiatric hospital for the rest of their lives.”

El Cajon Councilman Gary Kendrick also wrote a letter voicing shock at the proposed placement just outside the city's boundaries.  Placing a violent sexual predator, with a history of re-offense and parole violations, within walking distance of several schools, childcare facilities, churches, and next door to families with children is an extreme oversight," he wrote.

Kendrick concludes,"Local residents are outraged, and rightly so --Mr Badger's sickening history frightens parents who are concerned that their children will fall victim to yet another one of his reoffenses. Mr. Badger has been convicted of sexually preying on young men -- kidnapping and raping a 16 year old girl on one occasion. Diagnosed with Sexual Sadism Disorder, his criminal history and mental health clearly shows that his residency jeopardizes the safety of our children."

How you can take action:

The community has only until April 9 to submit comments and concerns to the SD Sheriff’s office on Badger’s proposed release.

An earlier proposal to house Badger in Campo was scrapped following a public outcry in the rural community.

More information can be found on the Grossmont Mount Helix Improvement Association website at: https://gmia.net/

Additional information passed out at the community meeting is included below: 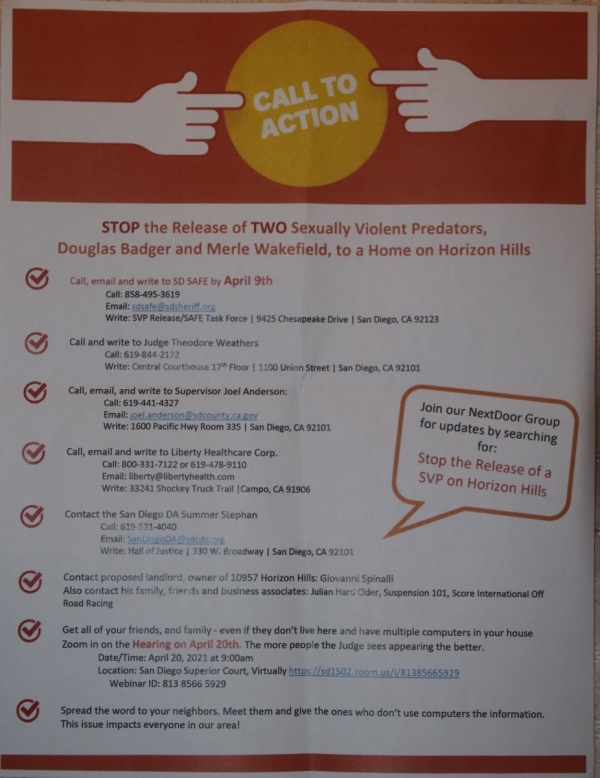 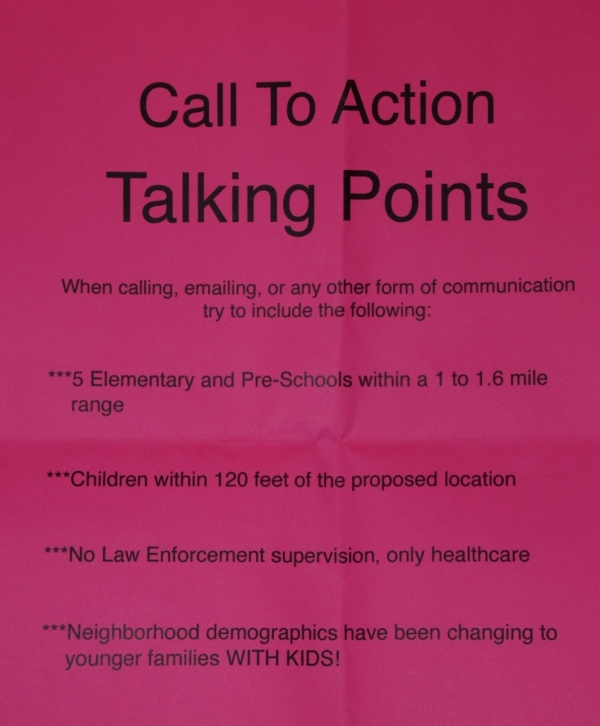 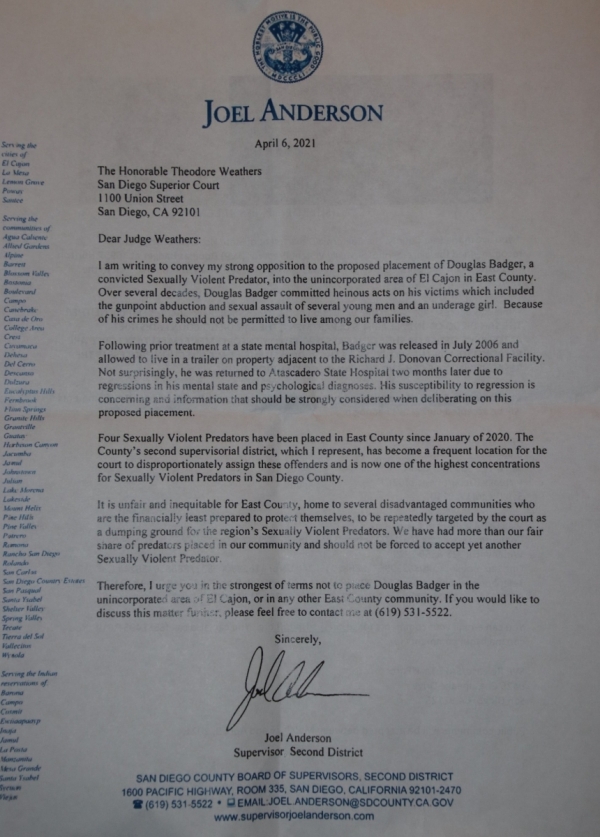 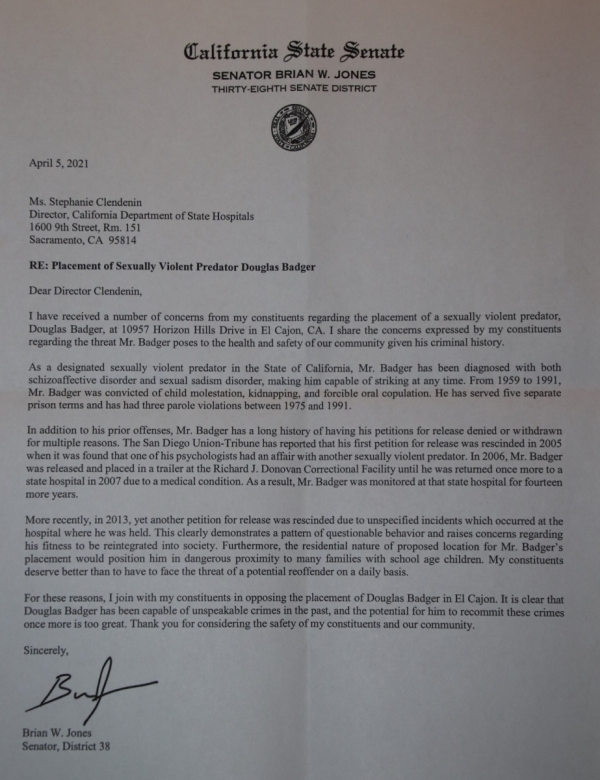 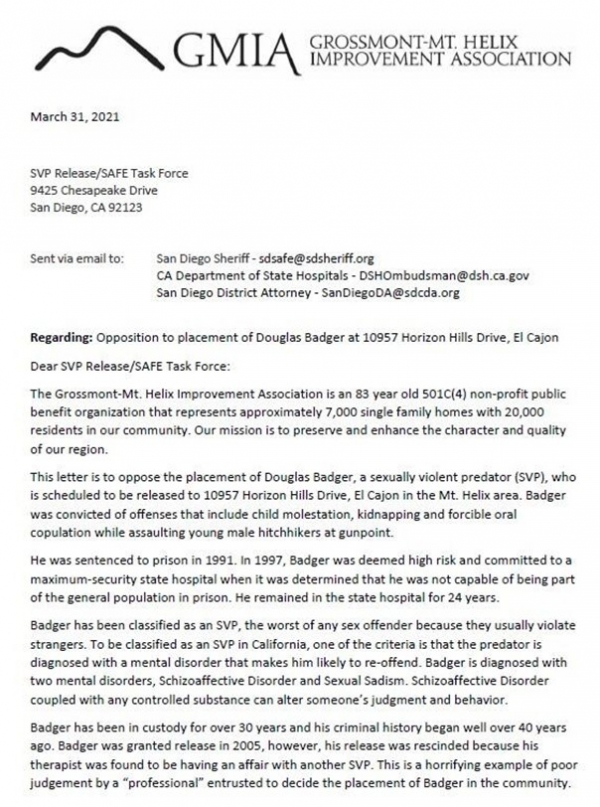 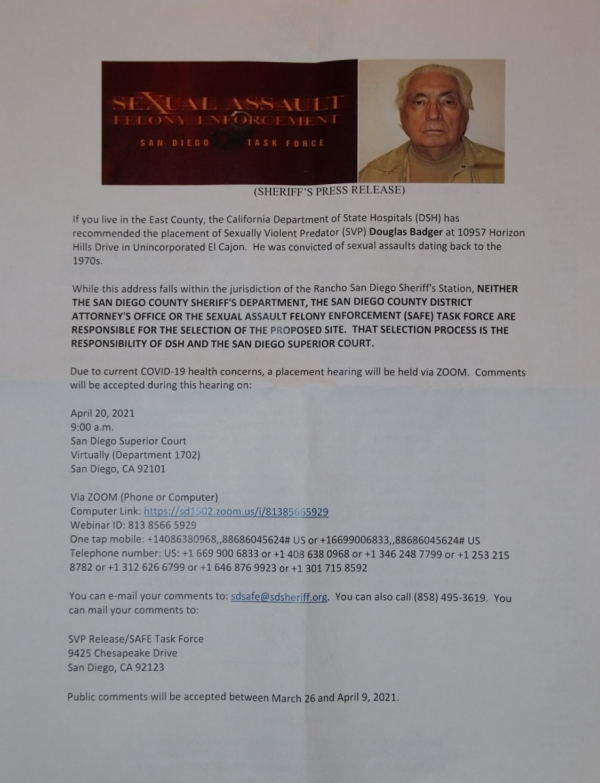