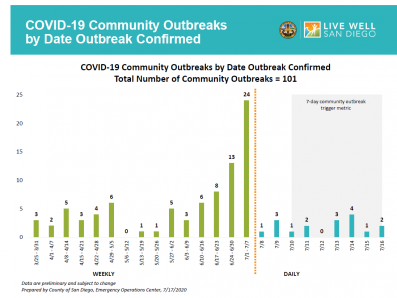 By Miriam Raftery
July 18, 2020 (San Diego) – For those hoping to see businesses reopen soon and children head back to school, the latest COVID-19 data from San Diego County does not look promising.
On Friday, the County reported a record 634 new cases, the most on any day.  Today, another 625 cases were reported, bringing the total to 23, 114.
On July 17 and 18, five new community outbreaks were reported:  three in restaurants, one in a gym, and one in a government setting. A total of 15 community outbreaks in the past seven days is well above the trigger of seven in a week that keeps the county on the state’s watch list. The other outbreaks include a variety of settings ranging from a barber shop or salon to private gatherings held in violation of county health regulations.
New cases must decline over 14 days before the state will allow schools to reopen.  The county must also get off the state’s watch list before businesses will be allowed to reopen.
In the past two days, 13 more deaths were also reported – seven women and six men raging in age from early 50s to mid-90s; all had pre-existing conditions. 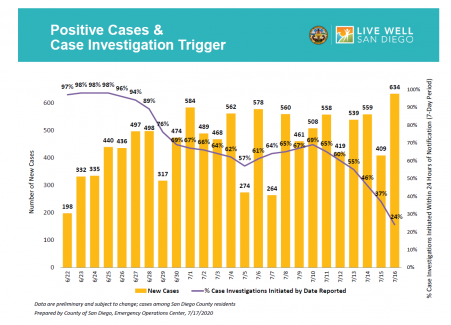 In the past two days, the positive test rates were 6% and 7% respectively; the 114 day average is 6.1%, so on this metric, the county is faring better, remaining below the 8% target rate.
A key problem is that the county’s contact tracing is lagging behind as new cases spiral upwards, a second metric that keeps San Diego County on the state’s watch list. The County is currently seeking to hire contract tracers to work full-time for the next 6-9 months at $25 an hour.  Back on June 23, 93% of positive cases had been investigated by tracers to identify others exposed and help prevent spread.  But as of Thursday, that number had dropped to just 24%, steadily declining over the past month.