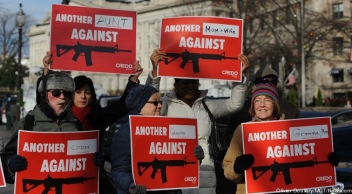 One company that has stood by the NRA and refused to sever ties thus far is Federal Express.

The NRA has fired back, attacking the students’ tactics as intimidation and accusing the companies of “a shameful display of political and civic cowardice.”

The NRA bankrolls enormous contributions to political campaigns, including some $13,000 to Congressman Duncan Hunter locally. Florida Senator Marco Rubio, confronted by students from the Florida school where 17 fellow students were murdered with an assault rifle, refused to support a ban on the weapons and also refused to turn down NRA money in the future.

The NRA has argued that the Second Amendment right to bear arms includes all types of weapons with no exceptions.

But even the Supreme Court’s conservative Justice Antonin Scalia has disagreed with that broad assumption. Scalia wrote the majority opinion in District of Columbia v. Heller, in which the Supreme Court ruled that while the District of Columbia’s ban on handguns in private homes went too far, regulation of gun ownership is, in fact, compatible with the Second Amendment.

Scalia wrote, “We also recognize another important limitation on the right to keep and carry arms.” He cited a prior case which found that the sorts of weapons protected were those ‘in common use at the time,” such as single-loading muskets. Moreover, Justice Scalia wrote, “We think that limitation is fairly supported by the historical tradition of prohibiting the carrying of ‘dangerous and unusual weapons.’”

Is there a real need for military style assault weapons? Obviously not a true hunting rifle. Self defense? Overkill in my opinion. No I'm not anti gun, but something must be done to help fix this glaring issue of unneeded weaponry.

Then there were muskets or some guns that could fire more than one round.
Today we are concerned about machine guns firing many more rounds per minute.
I have this pistol I found with a metal detector in a local park. Four shots.
http://www.nramuseum.com/guns/the-galleries/the-american-west-1850-to-19...(1).aspx