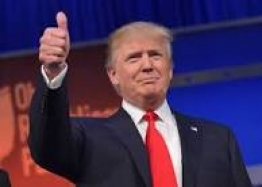 Originally printed in The Moderate Voice, a member of the San Diego Online News Association

June 17, 2016 (San Diego's East County) - It’s almost like a scene in Titanic, where the lucky ones are able to flee the sinking ship and get away on a lifeboat.

Big corporations often jump at the chance to sponsor big conventions. But when the Republican Party holds its convention in Cleveland next month, it’ll be minus some big corporations which don’t want to be stuck with the smell of the party’s presumptive Presidential nominee Donald Trump on their branding. This is a YUGE development, if you follow how conventions work:

A growing number of prominent U.S. corporations are opting to drop or scale back their sponsorship of the Republican national convention next month in Cleveland, as the nomination of Donald Trump promises a level of controversy rarely seen in such gatherings.

Among those to signal in recent days that they won’t sponsor the convention this year are Wells Fargo & Co., United Parcel Service Inc., Motorola Solutions Inc., JPMorgan Chase & Co., Ford Motor Co., and Walgreens Boots Alliance Inc. All of those companies sponsored the previous Republican conclave, in Tampa, Florida, in 2012.

None would comment publicly on the reason for the decision or say whether Trump played a role. Many said they wouldn’t support the Democratic convention either. The Cleveland host committee, which raised much of the money it needed more than a year ago, says that fundraising remains on track.

When most corporations support conventions, it isn’t to necessarily endorse but to get their brand out there and mix with convention goers. This year the minuses outweigh positives for many of them:

Big corporations usually shy away from partisan politics, but they often support conventions to promote their brands and schmooze with state and federal officials. Trump’s nomination threatens both of those priorities, according to Republican operatives who advise companies on political activities. A Trump spokeswoman didn’t immediately respond to a request for comment.

Some top elected officials are skipping the convention this year, and there are threats of large-scale protests. At the same time, a group of liberal activists is applying pressure, arguing that corporate sponsors are implicitly endorsing Trump’s incendiary statements about Muslims, Mexican immigrants, and others.

“It’s a question of balancing the desire to be present at this convention versus brand association with one figure who is so polarizing,” said Bruce Haynes, a Republican media consultant in Alexandria, Virginia. “That’s why the decision is so difficult, when otherwise it’s so easy.”

Plenty of big companies and industry groups remain committed to the convention. The American Petroleum Institute, the chief trade group for the oil and gas industry and a top donor to the 2012 convention, told Bloomberg it “will be participating” this year, without elaborating on the form that would take. AT&T Inc., Cisco Systems Inc., Alphabet Inc.’s Google, Twitter Inc., and Facebook Inc. have previously disclosed plans to provide technical services to the convention at no cost

Of course, corporations will (and do) have public explanations. But this Bloomberg report is only the latest.

For instance, the New York Times ran this in March:

Some of the country’s best-known corporations are nervously grappling with what role they should play at the Republican National Convention, given the likely nomination of Donald J. Trump, whose divisive candidacy has alienated many women, blacks and Hispanics.

An array of activist groups is organizing a campaign to pressure the companies to refuse to sponsor the gathering, which many of the corporations have done for the Republican and the Democratic Parties for decades.

The pressure is emerging as some businesses and trade groups are privately debating whether to scale back their participation, according to interviews with more than a dozen lobbyists, consultants and fund-raisers directly involved in the conversations.

Apple, Google and Walmart are among the companies assessing their plans for the convention, which will be held July 18 to 21 in Cleveland.

In addition to Mr. Trump’s divisive politics, there is the possibility that protests, or even violence, will become a focus of attention at the convention. Mr. Trump has suggested that there will be “riots” if he is not chosen as the party’s nominee, and the city of Cleveland recently sought bids for about 2,000 sets of riot gear for its police force.

A reduction in support from major corporations would be worrisome for Cleveland, which celebrated the awarding of the convention last year as a symbol of the city’s rebirth. The host committee is seeking to raise about $64 million for the event.

“I have talked to several people at companies who have said, ‘I’ve always gone to the convention, I’ve always participated at some level, but this year we’re not putting it in our budget, we’re not going, we’re not going to sponsor any of the events going on,’ ” said Carla Eudy, a Republican fund-raising consultant.

Walmart, which contributed $150,000 to the Republican convention in 2012, has yet to commit to contributing this year. “We haven’t made any decisions,” said Dan Bartlett, executive vice president of corporate affairs at Walmart, who emphasized that even before Mr. Trump’s rise, the company had been discussing reducing its involvement.

And one of the most blunt stories was carried by Politico in January:

No one knows business branding better than Donald Trump does. But now his brand is becoming an issue as companies start to wrestle with whether associating with a Trump-led Republican National Convention in Cleveland this summer could hurt their own reputations.

Company representatives and association heads have already begun huddling with their D.C.-based consultants about whether they should rethink their convention plans if Trump wins the GOP nomination. Several Republican lobbyists and consultants said there is concern that associating with the real estate mogul — given some of his inflammatory comments about women and minorities — could turn off customers and damage corporate brands.

“If it is him, many will scale down activity,” said one Republican lobbyist who has held conference calls about the so-called Trump factor.

With Trump leading recent polls in Iowa and dominating national surveys, C-suite executives and their advisers are taking him more seriously and working through possible contingency plans. POLITICO spoke with nine Republican lobbyists and consultants who confirmed that there are ongoing discussions about how to handle a Trump convention. They asked not to be named to avoid antagonizing the potential nominee.

Concern within the business community isn’t uniform. Other company and trade group representatives said their convention activities are proceeding as planned, whether the nominee is Trump, Texas Sen. Ted Cruz or someone else. A GOP spokesman said no worries have bubbled up to party officials.

But several lobbyists said the issue has come up regularly in meetings and conversations during the past week alone.

“Do you want your company logo underneath Trump’s name?” a GOP consultant said, adding that companies are working through that very question as they decide whether to cut six-figure checks for convention-related events. “Publicly traded companies guard their brand reputation first, and there could be a risk if they align with a Trump convention.”

….Trump’s incendiary comments on the campaign trail already have cost him some business. Dubai-based Landmark Group dropped all Trump Home products from its stores after the real estate mogul said the U.S. should temporarily bar all Muslims from entering the country.

Convention officials say they haven’t heard anything about companies pulling sponsorships. Businesses often commit equal amounts of money to the Republican and Democratic conventions and usually do so several months before the events. Companies are also looking at whether they will continue to sponsor unofficial parties and events for influential delegates, state party officials and lawmakers.

Emily Lauer, a spokeswoman for Destination Cleveland, the city’s tourism agency, said the group has been able to drive sponsorship by focusing on excitement surrounding the convention as opposed to the politics of any nominee.

I suspect that no longer totally holds with his recent comments in the wake of the Orlando shootings.

Still, missing the sponsors will probably not bother Trump.

He’ll stand on the bow of the ship Republican Party — as lifeboats put a lot of distance between him and many of the convention’s traditional corporate sponsors — and declare: “I'm king of the world!”

Trump is getting no support from big liberal business's that get YUGE tax breaks from the current Democrat administration. The same corporations that hillary supporters say are evil wall street.
Yet those same multi billion dollar corporations that do not support $15 minimum wage are dumping millions of wall street and Saudi capital into hillary's campaign slush fund. You realize how hypocritical you are for this. I am just as curious how you rationalize the many video's that have surfaces where hillary is calling blacks "Super Predators". Is there anything more racist than that? She will pander to anyone and any wall street donor to get elected. How truly sad.
https://youtu.be/8k4nmRZx9nc