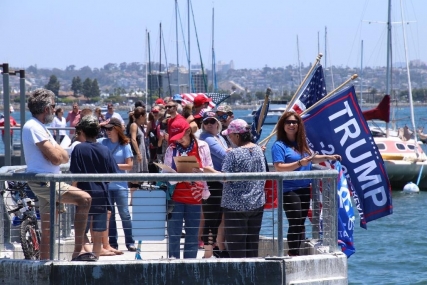 Nearly a hundred boats, ranging in size from motorized dinghies to luxury yachts, took part in the boat parade. It started by the submarine base on Point Loma and headed towards the Coronado bridge, where it turned around and passed along Coronado Island. 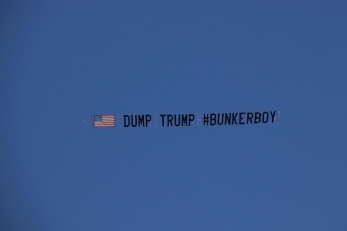 Many of the boats were flying pro-Trump banners and American flags.

The boat parade and spectators were treated to a fly-over by eight privately-owned airplanes which passed over the bay, smoke trailing.

Pro-Trump supporters, almost none wearing protective masks, also stood and cheered along parts of the bay as the boats motored by.

In addition to the fly-over, there was also a counter-protest plane towing a sign reading “DUMP TRUMP #BUNKERBOY”

While the boats were parading along the bay, several hundred Black Lives Matter demonstrators, nearly all of them wearing protective masks, met for a peaceful rally at the County Administration Building on the Embarcadero. 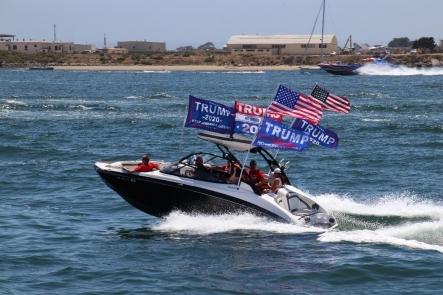 After listening to a few speakers, the demonstrators then marched up North Harbor Drive and into downtown.

The two rallies continued throughout the afternoon, expressing support for their messages, without incident. 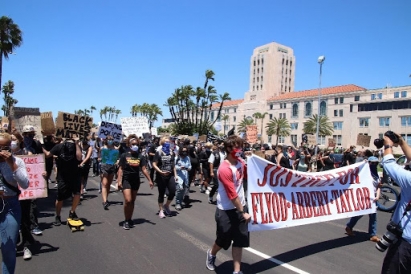 BLM rally at the Embarcadero (at the same time as the boat parade):