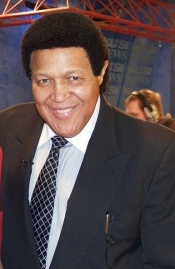 April 10, 2015 (El Cajon ) – Rock and roll superstar Chubby Checker will perform a concert with a “Twist” on  April 23rd at Sycuan’s Live & Up Close Theater.  Checker rocketed to fame in 1960, when his recording of “The Twist” was the number one song in the nation, sparking a new dance craze and countless variations such as the “Peppermint Twist”, “Let’s Twist Again” and “Twist and Shout.”

He won a Grammy for best rock performance and went on to record more hit songs such as “Limbo Rock” and “Knock Down Walls,” attracting new generations of fans.

Checker takes stage at 8 p.m. on the 23rd at Sycuan in El Cajon. For tickets, visit www.Sycuan.com.