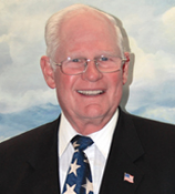 October 2, 2012 (El Cajon)—For 20 years, Bob McClellan has been serving on the El Cajon City Council.  He’s now seeking re-election, one of seven candidates vying for three seats. In an exclusive interview with ECM, McClellan reflects on his accomplishments through the years as well as his goals for the future.

Asked to name his most significant achievements, he first cites his successful effort to eliminate pornographic newspapers in newsstands during his early tenure on the Council.  “I checked with the D.A. and the City Attorney; both said there is nothing you can do locally because it’s a state law,” recalls McClellan, who then put pressure on the state Legislature to change the law.  “We sent copies of the newspapers out to city councils in legislators’ districts all over the state,” he says with pride. “Finally we were able to change the law to remove pornography from news racks."

McClellan believes another of his most important efforts was persuading a friend to convert an apartment house to condominiums, launching a movement that converted some 2,000 rental units to condos. “We had 17,000 apartment dwellers—a lot more renters than owners and it was not a good thing for the city,” says McClellan, who added that units were upgraded with dual pane windows and other improvements.  The conversions increased the tax base and "improved demographics," he adds.

He voices disappointment that the economic downturn has halted conversions for now, but adds, “As the housing market firms up, I’d like to see some more condominium conversions. That is always uppermost in my mind…The more rental units we convert, the more demographics will change.”

Asked about the impact of conversions on displaced renters who may not be able to afford to purchase their units, McClellan voices no concern. “Well, there are other places for them to live,” he replies.

El Cajon currently has the highest poverty rate of any city in San Diego County.  Asked if there are steps the Council could or should take to reduce poverty or help those in need,  however, he replies, “I think it’s beyond the city’s ability to change the poverty rate. These people are here and they don’t have jobs or good paying jobs, apparently; with some it’s because of education.”

He did vote to set up Set Free Ministries in the East County Transitional Living Center, an action in which he takes pride. “They have done a marvelous job transforming close to a thousand lives and making taxpayers out of tax users and compliant citizens out of uncompliant people,” he states.  “That’s been a real help to our community.  We were fought by some businesses at first; they sued us and the city won the suit.  They didn’t want people that had been on drugs and alcohol who were changing their lives in the community,” he recalls. “But after a year, we got a letter from one of the owners who was a major one against it, saying how much he appreciated what we had done.”

Presently he views the growing number of immigrants and refugees as an issue facing El Cajon, though stops short of offering government programs or funds as solutions.

“To be a citizen in the U.S. you need to be able to speak good English and I believe that’s holding some people back who have arrived from the Afghan wars or Mexico or other countries," he states. "This has been a stopping off place for them. Some rise above and some don’t but they have to strive to do it. You have to pull yourself up by the bootstraps. It’s not easy, but you can get out of poverty—through education and hard work.”

McClellan spent many years working in the private sector as owner of McClellan Buick, which was started by his father. He began working there in 1950 and bought the business from his father in 1970.  The dealership added Pontiac and GM vehicles before closing in 2007, when McClellan transferred ownership to Bob Baker.

A staunch conservative, McClellan is endorsed by the San Diego Republican Party and the Lincoln Club.  He opposes new taxes and supports a balanced budget.

On the East County Performing Arts Center, McClellan has this to say. “I want to see it opened back up again.”  Citing the ECPAC Foundation’s recent efforts, he adds, “There has been recent communication from a group working on it to see what the requirements really are; I’d like to see somebody come up with a couple million dollars…There are people who are adamant to have the theater open.”  He says the council  “hasn’t been talking to anybody else,” and voices cautious optimism for the theater’s future. “Hopefully something will happen there.”

His budget priorities are to fund police and firefighting.  “The main reason our government was founded was protection of the people,” he observes. ‘There used to be laws in some states where you had to own a gun—shot, wadding and a rifle—and carry it everywhere you went, even to church because you needed to protect your family and worldly goods…I think that it’s more and more evident that the world we live in today with violent crime that’s increased, you never know what will happen out there,” adds the Councilman, who supports open carry laws for California but is doubtful that the Legislature would approve such a change.

To reduce crime in El Cajon, he supports El Cajon’s crime-free apartment housing and multi-housing program, which he notes has been “very successful”, along with Neighborhood Watch programs to reduce crime.

He is open to changing the law to allow chicken ownership in El Cajon.  “I had chickens when I was a youngster, I sold eggs,” recalls McClellan, who believes the experience helped him develop  “personal responsibility on how to care for something.  It’s like young girls who have horses; they have to brush them, feed them,” he notes, adding that his daughter  owned horses and her children today are riding and caring for the animals.” While roosters will remain prohibited in El Cajon, he predicts, “I think we will have some hens here if the property size is adequate.”

Over the years, McClellan,has drawn controversy for  putting videos on the history of Christian pastors in America on a city-owned TV station (a move the city attorney later determined was unconstitutional) and for stating in  a past candidate forum that “I don’t believe in separation of church and state.  I believe the court got that wrong.”  More recently, he’s drawn criticism from some members of the Chaldean community and others who suggest the all-white, male, Christian conservative Council is not reflective of El Cajon’s diversity.

Asked how he would respond to those who have called for more diversity and support for minorities in EL Cajon, McClellan stands firm. “When you win an election, there are more people who want you than don’t want you.”   He notes that elections are often won in  El Cajon with less than a majority when there are many candidates running,  but that “you have a majority of what you need for the election to be won.”

The long-term incumbent Councilman concludes, “I think I have a record that people like.”

I have a Federal lawsuit seeking to overturn California's 1967 ban on Loaded Open Carry.  If successful, it would render the unloaded open carry bans irrelevant.