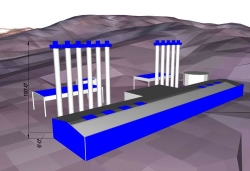 July 19, 2012 (San Diego)  At  9 a.m. today, the San Diego Planning Commission will hold an important vote to determine whether to rezone open space to industrial land in order to allow a proposed natural gas-fired power plant to be built next to Mission Trails Regional Park.

At its hearing on June 28, the Commission voted 3-2  to deny initiation of the community plan amendment requested by Cogentrix, a subsidiary of Goldman Sachs that responded to SDG&E ‘s request to build the plant. However, the Commission’s rules require four yes votes to take any action, so the item was trailed to July 19.

The majority of Commissioners present at the June hearing agreed with power plant opponents that Cogentrix did not present sufficient evidence to meet the criteria necessary to initiate a process leading to such a drastic change in land use. Supporters contended that the power plant is needed to meet our region’s energy needs.

Commissioners Eric Naslund, Stephen Haase and Susan Pearson voted against initiation of the amendment to authorize the zoning changes at the June 28 meeting. Commissioners Mike Smiley and Tim Golba voted in favor.  Two other commissioners were absent--and now the impartiality of both is in question.

Commissioner  Robert Griswold recused himself from voting on a continuance vote back in March, after revealing that he owns stock in Sempra, parent corporation of SDG&E.   He then reversed course and voted in April. He was absent at the June vote.

Pete Hasapopoulos with Sierra Club San Dieigo has written the Commission chair, Naslund, urging that Griswold be recused for today's vote, since SDG&E would benefit from its power purchase agreement with Cogentrix and potentially, future purchase of the power plant in keeping with SDG&E's history of power plant purchases built by third parties.

Now Kevin Brewster with Save Mission Trails has written a letter to City Attorney Corrine Neuffer questioning the impartiality of another commissioner, Mary Lydon.

“Ms. Lydon has a close relationship with Robin Madaffer, the lobbyist working on behalf of the applicant Cogentrix,” Brewster’s letter states, adding, “that raises questions about her ability to remain purely objective while making her decision in the initiation.”

Lydon is executive director of the Urban Land Institute’s San Diego-Tijuana District Council, which Madaffer chairs.  Brewster notes, “The Chair of Ms. Lydon’s organization would be her principal supporter, advisor and confidante…Even if they have not discussed Quail Brush, at its est this places Ms. Lydon in a highly awkward position that could unavoidably cloud her ability to make a decision based solely on the merits of the initiation request.”

At the June meeting, Commissioner Susan Peerson expressed concern that this kind of non-conforming use would be a foothold for other incompatible industrial uses in an area to be set aside for permanent open space preservation.

Commissioner Stephen Haase, in making the motion to deny the initiation, voiced concern about the state preempting the City’s local land use review authority.  He concluded that with the state in control of the schedule for power plant licensing and in control of the environmental review, the City Council needs to look at this issue sooner than later. Such a timely review could only happen if the Commissioners deny initiation of the plan amendment and the applicant were to appeal that denial to the City Council.

Statements by opponents that SDG&E’s plans to build more fossil-fueled power plants in our region are not warranted and will be very costly to ratepayers also resonated with some commissioners, placing into doubt how the power plant would be a public benefit.

“We do not need to sacrifice the integrity of our precious parkland and open space, nor accelerate climate change in order to meet electrical power needs here in San Diego,” stated Jay Powell,  a member of the Sierra Club San Diego “Run with the Sun” campaign.

Energy expert Bill Powers testified that our region has approximately 7,000 megawatts of potential from local rooftop and parking lot solar, noting that it is available when we reach peak load on hot sunny days.

He also explained that the Quail Brush price tag of $150 Million would end up costing ratepayers over $600 Million by the end of its 20 year finance period.  The power plant would only generate 11 permanent jobs while there are already 1,000 local jobs directly tied to the solar industry.