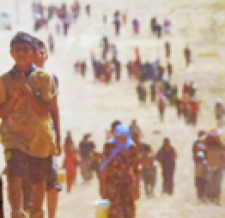 September 28, 2014 (San Diego’s East County)--Congress adjourned last week without voting upon a measure to help relocate Iraqi minorities displaced by ISIL, the Islamic terrorists who have seized control of much of Iraq and Syria.

Congressman Juan Vargas, who sponsored the bill, said the measure had broad support and that he will work to win passage in the next session.

Failure of Congress to take action before adjourning comes as a major disappointment to Iraqi Chaldean Christian leaders in East County, who have spent months lobbying Congress and the administration to help save Iraq’s persecuted Christians and other minorities.

Bishop Jammo and  Iraqi-American leader Mark Arabo, head of the Neighborhood Market Association,  from San Diego traveled to Washington in efforts to build support for the measure. They sought to raise the cap on the number of Iraqi refugees who would be admitted to the U.S. , making the case for at least 70,000 people for whom they provided documentation.

ISIL terrorists have forced Iraqi Christians, Yezidis and other religious minorities to flee their homes with nothing but the clothes on their back, or face death by the sword if they refused to convert to Islam.  Some victims have been tortured by ISIL; women and children have been kidnapped and sold into slavery, while others have been beheaded or killed in other brutal ways.

Arabo told the UT San Diego, “My worst fear is we will look back three years from now and say we could have stopped the genocide.”