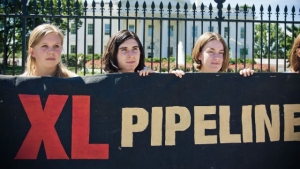 Democrats Susan Davis, Scott Peters and Juan Vargas voted against the project, while Republicans Duncan Hunter and Darrell Issa voted for it.

“This bill is essentially an earmark for a Canadian oil company,” said Davis. “Keystone will have virtually no impact on job creation and an unnoticeable effect on gas prices.  The project is very high on environmental risks and very low on reward.”

Issa said Congress “made the economy a priority, and created thousands of new jobs by passing legislation to approve the Keystone XL pipeline. This project will go far in stabilizing our energy sector while creating highly technical and skilled labor jobs for years to come.”

Following passage by a 252-161 margin, the measure goes to the Senate. If approved, it may face a veto by President Obama.

The project would carry heavy oil from Canada’s tar sands to refineries on the Gulf of Mexico.