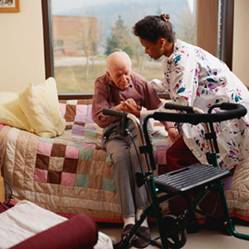 March 9, 2017 (Washington D.C.) – Congress is considering a bill that will effectively end California’s 20-plus year civil protection system for victims of elder abuse or neglect perpetrated by health care providers.

“H.R. 1215 is a corporate wish list of anti-justice measures to immunize health care providers from accountability for terrible care by limiting justice for victims of health care malpractice,” warns California Advocates for Nursing Home Reform, a nonprofit that advocates for improving care for patients needing long-term care. “The bill is misleadingly named the `Protecting Access to Care Act of 2017.’  A more apt name for H.R. 2115 would be `Obstruction of Justice for the Injured.’”

While California already has a $250,000 cap on non-economic damages – the centerpiece of H.R. 1215 - elder and dependent adult abuse cases are rightfully exempt.  H.R. 1215 would end this critical exemption.
“Congress is about to take away vital elder and dependent adult protections that have long served our most vulnerable citizens,” said Pat McGinnis, Executive Director of CANHR.  “If H.R. 1215 passes, liability for extreme abuse and neglect will be limited to $250,000, creating a system where poor health care practices will be profitable.”
H.R. 1215 would prevent the health care industry from being held liable when their actions fall below, even far below, the acceptable standards or when they intentionally hurt a patient.  McGinnis calls that “un-American” adding, “Although the bill is being put forward to `drive down the costs of health care,’ it will only serve to insulate bad actors from liability, deny any meaningful remedy for those they injure, and ultimately cost taxpayers billions of dollars.”

Private enforcement of health care standards saves the government billions in healthcare costs by preventing avoidable injuries and in public enforcement costs while generating millions of dollars in recovery for the Medicare and Medicaid programs.