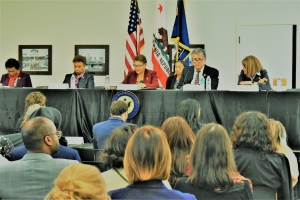 Dec. 1,  2019 (San Ysidro) “How is it that some of the poorest nations around the world can take in people in crisis?” questioned Rep. Karen Bass (D-37th) at a House Foreign Affairs Subcommittee Field Hearing held at the San Ysidro Public Library on Nov. 22.

“What can we learn from these countries? How do international organizations like the United Nations High Commission for Refugees, the International Committee of the Red Cross, the International Organization for Migration and others monitor and advise on the surge in migrants, refugees and asylum seekers? What are the international protocols, norms, standards, and practices that should be followed?” she continued. “Basically, I want to know, what can we learn from other countries around the world. But mostly, I want to understand where the United States is with regard to these practices, norms and standards.”

The death of a black Cameroon citizen sparked the Congressional Black Caucus (CBC) visit that included a tour at the border and a press conference, followed by a field subcommittee hearing.

Cameroon citizen Nebane Abienwi, 37, who had applied for asylum in the U.S., died in October while in custody of the U.S. Immigration and Customs Enforcement. He had medical issues and had been transported to the Otay Mesa Detention Center, where he died.

Abienwi’s death raised questions regarding the treatment of all asylum seekers at the border and in particular for an under-reported minority – black asylum seekers from a variety of nations.

“The racism they must have met.....is wrong.” said Vargas of the black asylum seekers.

Witnesses at the hearing included whistleblower Doug Stephens, the first asylum official to publicly criticize the policy. Stephens testified about the interviews he conducted, his training, and his views about what he was asked to do in order to enact the Trump administration’s new immigration policies. 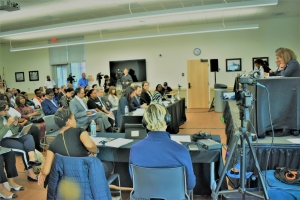 The witnesses, which also included Americas advocacy director for Amnesty International Charanya Krishaswami, highlighted various aspects of the humanitarian crisis including the Migrant Protection Protocol (MPP) known as the remain in Mexico policy.

“When we were trained on the policy, we were not allowing any migrants to have legal representation,” Stephens said. He went on to challenge the legality of the policy altogether. Rep. Clarke thanked him for his patriotism.

Another witness offered up one of her suggestions:

“Black immigrants are rendered invisible,” said witness and executive director of the Black Alliance for Just Immigration’s Nana Gyamfi. “We know there are thousands in Mexico.”

The Lloyd de Llamas multi-purpose room filled up with press, interested political parties, representatives from Sen. Dianne Feinstein’s office plus, and members of organizations that assist asylum seekers such as Abdi Mohamoud. No Republican members of Congress participated on the hearing panel; only Congressional Democrats.

Mohamoud, executive director of Horn of Africa Community in San Diego, noted his organization has helped 200-300 immigrants this past year “from Ethiopia, Kenya, and Uganda.”

“We stand for comprehensive immigration policies,” said Rep Bass at the end of the hearing. “The whole world is experiencing the massive movement of people….people are seeking safety.”