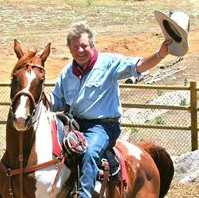 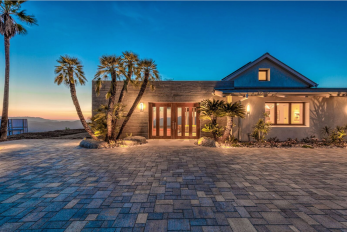 November 17, 2017 (Ramona) – Out of the ashes of the 2007 firestorm in Ramona, Casa Aguilar arose.  The home of Pete  Beauregard and his wife, Amy McQuillan, just won the U.S. Department of Energy’s 2017 Innovation Award for zero net energy use. It’s also built to withstand wildfires.

On October 24, Beauregard, a rancher, veteran, ex-rodeo bullrider and candidate for Congress in the 50th Congressional district took the bull by the horns and convened a think tank meeting at his visionary home. The event brought together top green industry leaders to brainstorm ideas for bringing green manufacturing and building jobs to East County.

“Pete has a vision of creating green manufacturing here and creating jobs,” says Rich Williams, vice president of Alliance Green Builders, which constructed the home.  “We thought it was a good idea to have a think tank, a brainstorming event.”  Williams added that the goal is to learn “What kind of incentives are needed to bring 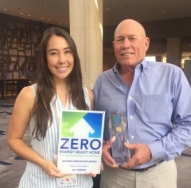 Jeff Adams, Alliance Green Building’s president (photo, right, with Katie Teare), says that in building this home, he wanted to build a “pilgrimage site that demonstrates the viability of a better future” and demonstrate what is possible in our region.  In addition to the national federal award, the home is also the first LEED certified, net-zero home and passive solar house in Southern California, with windows situated to maximize energy from the sun. 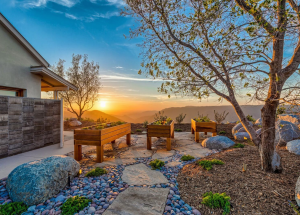 The home also has San Diego County’s first onsite wastewater treatment permit and the first permit to use all collected rainwater for all indoor water use.  In addition, it strives for eventual grid-disconnection through utilization of batter power, solar photovoltaic panels, and a 45-foot wind turbine.  From controllable lighting to insulated windows, energy-efficient appliances and organic gardens in raised beds,  the home is as sustainable as currently possible under existing technology.

“It takes innovation to solve the problems of climate change and keep fossil fuels in the ground. The oil age will end from innovation,” Adams says. According to Alliance Green Builders’ website, “the home serves as a demonstration 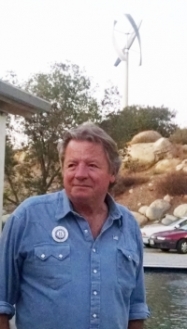 and case study for future high-performance residential projects in the region.”

Beauregard laid out his vision.  “East County is such a blighted area.  A lot of people are out of work….We need to start building here. We can create at least 6,000 jobs here.”

Casa Aguilar is built to the “outer limits” of what’s possible technologically in the green building field.  But Beauregard found that many products weren’t available in the U.S.  A wind turbine from China broke down twice. “We had a guy replace the ball beaings with aircraft ball bearings. Now it’s not even humming. There’s no wobbling.  This is something that we can build here,” Beauregard says.

Windows from Germany are designed to withstand 125 winds and keep “climate out and comfort in,” says Beauregard.

Lane Sharman, energy consultant to Solana Energy who helped design the home, also spoke at the event.  “We need to regenerate our future.” He says Beauregard shares that value.  “We are now living the transition,” from fossil fuels to sustainability, he adds.

A cutting edge technology is using water to move energy uphill, and in the evening move it downhill to create electricity. “Hydro equals perfect storage.  Large scale hydro storage is how you make intermittent energy available all the time.”

John Beck from Wellspring  says his company would like to do manufacturing in San Diego, but is also considering China or Mexico.  “If we can just get a package of all things related to manufacturing to be as good or better than Mexico or China,” he says, “Our desire is to manufacturer here, bring jobs here.” 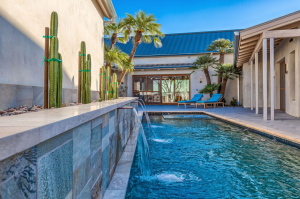 The company has done 100 installations ranging from whole house to pool and landscaping systems.  But to expand, Wellsprings needs full injection molding.

A former avocado farmer with a biotech background, he says he created the Wellspring system because well water on his own property was too salty. The system uses no electricity, has no mechanical moving parts, and no waste. The concept utilizes physical changes in water permeability and has been published in three peer-reviewed scientific journals, according to  Beck.  Water permeates through soil, so it takes less energy for plants to get water—using 30 percent less water to get the same crop yield. 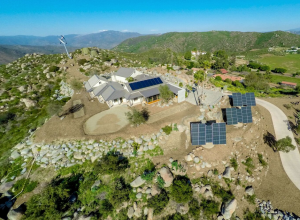 Another innovator at the brainstorming session is Onur Topcu from Ustucco.

“Our product covers seven times more than conventional stucco and  it is lighter,” Topcu says. “We use 50 percent less water to prepare it, it’s green, and made of 40% recycled minerals; the rest is water.”  The produce has the highest R value on the market for insulating and also provides water proofing and fire proofing, he adds. “WE can install up to one inch in a single day, so there’s no waiting between coats.”

Currently the company is based overseas, building factories in Dubai, South Africa, Turkey and other places with a warehouse in Long Beach, CA.  Topcu says Ustucco wants to build a factory and also an academy here.  “I would like to organize events like this every month – bring in manufacturers and educate them,” he says, adding that there is a lot of interest in the company’s products in California.  It can save time and labor, building better insulated homes. I’m willing to make products in the USA. I moved my family here, and I will hopefully become a citizen in two years.” 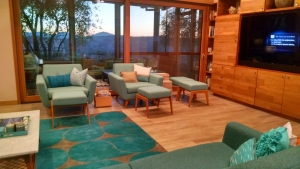 ’s vision, he tells the Congressional candidate, “Your goal, your dream is amazing.”

Dan Hume from Hume and Company spoke about sodium borate, a micronutrient mined in borate regulated as a fungicide and termiticide that can be infused into wood.  The product is a salt based one with zero volatile organic compounds, and it breaks down. By contrast, the gas used in fumigation is a greenhouse gas that produces the equivalent of 365 cars on the road for each fumigation.

“We can build a home and infuse wood to last the lifetime of the home with zero wood destroying organisms,” he says, adding that 4 to 6 million acres of forest are cut each year to replace wood damaged by termites in California. 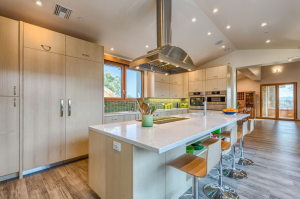 Also important:  the flash point for  wood infused with the product is 3,500 degrees. “Some homes I treated were affected by fires and the homes did not combust. One house caught on fire and put itself out after 25 hours of smoldering,” Hume states. “The problem is fighting regulations,” including a $3.6 billion termite industry profiting off pesticides.

Casa Aguila has also been featured in a new book, California’s Energy Future: Passive Home Buildings.  You can view photos and a video online at http://alliancegreenbuilders.com/portfolio/casa-aguila/

You can read more about Beauregard and his candidacy at http://www.beauregard4congress.com/.

His slogan, “country before party,” is emblazoned on the front of his sustainable vehicle, which also has a bullrider logo and the phrase “taking the 50th by the horns” emblazoned on its hood.  The latter is a nod to Beauregard’s past

career as a rodeo bull rider; he has also served as a medic in the U.S. Marines and founded a medical clinic before becoming a rancher in Ramona and a sustainable living advocate along with his newlywed wife, Amy. 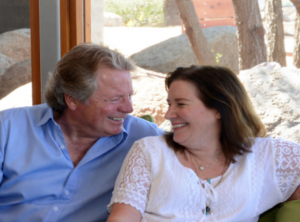 Beauregard says creating that innovation and bringing jobs to our region is why he’s running for Congress against incumbent Congressman Duncan Hunter.

“It’s time to step up and try to make this happen on a federal level,” says Beauregard, who believes he can also make green jobs happen on a local level.  That entails looking at regulations,  tax incentives, and more.

“If there are too many regulations, we’ve got to address that – but it’s got to be based on science and best practices,” he concludes.