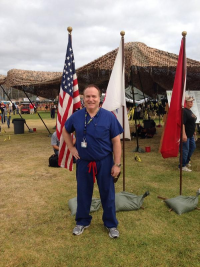 As the Senior Medical Officer aboard two combat warships (USS ELLIOT DD-967, USS REID FFG-30), Kimber is all too familiar with Emergency Medicine and treating those who have served.  He spent 20 years in active duty in the U.S. Navy, retiring as a Senior Chief Hospital Corspman. Currently he is a Physician Assistant practicing neurosurgery at Palomar Medical Center in Escondido.

Kimber says he is is alarmed at how veteran’s needs are being neglected and feels we as a country owe them more. He worked Stand Down last year as a provider and was shocked at some of the patients he treated.

He states, “I had to admit five people to a local hospital and three of the patients I saw needed emergency surgery. One veteran was walking around with a 104 degree temperature. Another veteran’s blood sugar was over 500. I say over 500 because that’s as high as the machine could read. Normal blood sugar is 70-100.”

Kimber says he is appalled at the recent problems within the VA system, but also knows they are not really recent-- only recently brought to the attention of the public. One ofKimber’s top issues as a candidate is better care for our veterans. He seeks to address the antiquated system used by the Veterans Administration, lack of mental health support, the lack of providers and facilities for veterans to seek treatment, the rising number of homeless veterans and violence against women in the military.

For more information, on James Kimber’s candidacy, you can visit http://www.kimberforcongress.com/