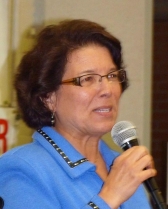 “I will be a fighter,” pledged Saldaña, who was born and raised in the district.  “Can you believe [Congressman] Darrell Issa  held a hearing on birth control and would not let a single woman speak?” She added, “What we are fighting against is people who want to send us back not to the 1950s, but to the Middle Ages.”

Saldaña, who has been endorsed by Emily’s List, the American Federation of Teachers, and other national groups, said Congress needs more women members.  She added that birth control and other women’s healthcare matters should be discussed between a woman and her doctor and should not be her employer’s business.

She emphasized that in Sacramento, she has proven her ability to work across the political aisle, authoring  dozens of bills signed by a Republican Governor .  Some became national models, including stopping predatory lending on military families for example.   She also cited her endorsement by statewide office holders including Insurance Commissioner Dave Jones and Congresswoman Karen Bass, former Speaker of the Assembly.

Earlier this week, Saldaña released her tax return and challenged Peters to do the same. He has refused, but did release a financial statement showing a brokerage account worth $5 million to $25 million along with other sizeable assets. Saldaña reported an adjusted gross income of just under $39,000 after deductions for 2010, her last year in the Legislature.

Saldaña emphasized that she is relying on many contributions from small donors  instead of corporate backing, while Peters argued that he has “even outraced Brian Bilbray by $50,000” in fundraising.

Peters emphasized his experience in the Council working across the aisle on issues such as highways, sewer spills and beach closures.  He denounced Bilibray for voting to take part in a “war on women” and for adhering to a “no new taxes” pledge while Congress is “broken.”

He recalled hardships faced by his father, a minister, and mother in order to send him to college, with and called for college affordability.  “I cleaned pigeon cages in the psychology department. That was the lowest esteem job I ever held—until I was elected to the City Council,” he quipped.

The club unanimously endorsed David Secor  over perennial candidate Connie Frankowiak for the newly drawn 50th Congressional District seat held by Duncan Hunter.  A Vietnam veteran who  graduated from San Diego State University on the GI bill, Secor says he has worked hard all his life as a teacher, construction worker, farm worker and Superior Court employee before retiring earlier this year.

Secor has pledged to fight to restore the American dream for the Middle Class and all Americans by working to bring jobs home to America and the 50th Congressional district, fighting to protect Social Security and Medicare, supporting tax fairness and respecting the Constitution.  He also supports women’s rights and civil rights, as well as stronger fire protection for our region .  Secor told ECM he supports “clean energy policies—especially solar power,  while protecting public lands and respecting  the character of communities.”

With two Democrats, a Libertarian, and a Tea Party Republican all in the race, the new “top two” primary system raises the possibility that two Republicans could square off in November. Secor urged area residents to support his campaign “so that I can survive June 5” to do battle with Hunter “and return District 50 after 32 years to the people.”

In the hotly contested 79th Assembly District, an open seat, four Democrats have declared their intentions to run against Republican Mary England.  Club members did not meet the required 60% threshold to endorse any candidate in the race.

Educator Pat Washington recalled growing up in a poor family and how teachers cared enough to convince her family to buy her a pair of eyeglasses and later, convinced her to stay in school after a teen pregnancy. “I ended up with a Masters degree in Education and aPhD.”  Running on a pro-education platform, she pledged to make sure that “we get the best quality of life for everyone in our community.”

Sid Voorakkara, a first generation American from India, has held leadership positions in Planned Parenthood and recently received endorsement from the California Nurses Association, he said.  “Now is not the time for cutting education and health and human services funding,” he said.  “It’s a time for investing in people.”

Dr. Shirley Weber, former San Diego School Board member, said she is running because Sacramento is “broken and we need someone to put it back together.”  She also noted that after this term, there will be only one Democratic woman left in Sacramento. “That is unacceptable,” she said.  A 30-year resident of the district, Weber said she is the child of sharecroppers in Arkansas.  “I feel indebted to California,” said Weber, who received a PhD from the University of California, Los Angeles at age 26.  “My father lived with the assurance the California would be better for our children,” she said, adding that she wants to restore that promise for all children in our state.

In other races, the club also endorsed Lori Kern-Greenberg for Helix Water District and Mary Kay Rosinski for the Grossmont-Cuyamaca Community College Board.

Rosinski said the Board, during her tenure, has corrected fiscal mismanagement from the past, found a new chancellor and leadership team for the district, and “turned it around 180 degrees.”  She said the district has managed to balance its budget without laying off permanent staff and has restored transparency.  “Even though the budget is grim, we are still making student success our priority,” she concluded.