September 12, 2014 (San Diego's East County) - A debate has been announced between Republican Congressman Duncan Hunter and his Democratic opponent, James Kimber. The debate is set for Friday, September 26th from 7 to 8:30 p.m. at Cuyamaca College’s Performing Arts Center in Rancho San Diego. 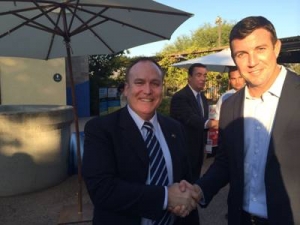 Both candidates are veterans.  The debate will be sponsored by two military and veterans organizations: Veterans Campaign (http://www.veteranscampaign.org/#home) and the National Association for Uniformed Services (http://www.naus.org/).