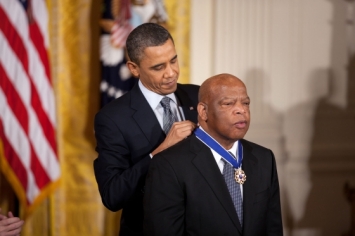 “We’ve got to move all Americans towards that place where we can lay down the burden of race and create one America, one multiracial democratic society.”

Calling him the “conscience of the Congress” where he served as a representative from Georgia for over 40 years,  House Speaker Nancy Pelosi announced his death yesterday and ordered the flag over our nation’s capitol flown at half-mast.

Lewis denounced violence and was arrested more than 40 times for peaceful protests against injustice. In 1965, TV coverage of  a trooper fracturing his skull with a bully club in what became known as Bloody Sunday on the Edmund Pettus Bridge in Selma, Alabama outraged the nation, leading to swift passage of the Voting Rights Act signed into law by President Lyndon Johnson.

One of 10 children, he shared in farm work after his parents earned enough money sharecropping on a white man’s land to buy their own farm. His childhood home had no running water or electricity. Lewis tended to chickens, preaching to the birds. Inspired by Rev. Martin Luther King’s radio sermons and the Montgomery bus boycott, he later studied at the American Baptist Theological Seminary in Nashville, working as a janitor and dishwasher to fund his studies. 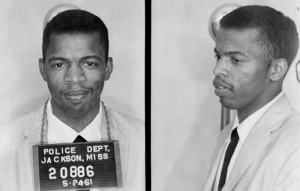 Though his parents encouraged him to accept segregation as the way things were in the 1940s and ‘50s, Lewis rejected that notion. He became one of the original 13 Freedom Riders, activists traveling in the South in 1961 to challenge segregation in transportation. He led lunch-counter sit-ins to end segregation at diners and organized protests at many other venues. By his own account, he was arrested more than 40 times for protesting nonviolently. He was often beaten by thugs or by law enforcement and was once left lying in a pool of blood. Yet, he kept on marching.

He lived to see passage of the Civil Rights Movement, the Voting Rights Movement which empowered his own election to public office, and the first African-American man elected President of the United States.  That President, Barack Obama, presented Rep. Lewis with the Presidential Medal of Freedom in 2011, the highest honor bestowed on an American civilian.

He was the last surviving speaker from the 1963 March on Washington for Jobs and Freedom, where he spoke along with Rev. Martin Luther King, Jr. on the steps of the Lincoln Memorial.

His motto became getting into “Good Trouble,” the title of a documentary film on his life. He also authored a series of graphic novels, or comic books, on the civil rights movement to inspire young people to learn about history and become active in the fight against injustice everywhere. 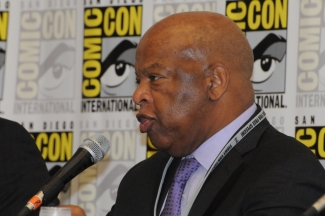 During a 2013 visit to Comicon in San Diego to promote “March,”  a graphic novel about his own life, Lewis spoke with East County Magazine reporters Nadin and Tom Abbott in a taped interview. (Photo, left, by Nadin Abbott)

“I hope that hundreds of thousands of young people all across America and around the world would pick up this book and be inspired to engage in nonviolent direct action,” he said. “When they see something that is not right, that is unjust, that they would be moved to protest.”

That interview took place shortly after the murder of Trevon Martin, an unarmed teen killed by a “stand your ground” armed white man in Florida that sparked national protests. Lewis said nothing had moved him more since the murder of Emmett Till in 1955.  “I was 15 years old when that happened,” he reflected. “There is a lot of pain in America right now, on the part of all citizens.  IT doesn’t matter if they are black or white, Latino, Asian American or Native American. People are hurting and that is touching the very souls of a lot of people…We’ve made a lot of progress, but we’re not there yet.”

Still he took hope in young people for the future, noting, “Many young people cannot even conceive of the whole question of race. Young people are growing up together, studying together.” He noted that many have never seen white-only or colored-only signs except perhaps in museums, videos or books.

“We’ve got to move all Americans towards that place where we can lay down the burden of race and create one America one multiracial democratic society,” he concluded in his interview with ECM.

At times, his actions changed hearts and minds. A Ku Klux Klan leader who once beat Lewis came to his Congresional office years later, at age 70, to apologize and set a better example for his son.  Lewis credited this transformation to the "way of peace, the way of love," CNN reported. "We must never, ever hate. The way of love is a better way."

On another occasion, during a Bloody Sunday commemorative march in Selma, the city's segregationist mayor from 1965, still in power, presented Lewis with a key to the city in 1998.  "Back then, I called him an outside rabble-rouser," Mayor Joseph Smitherman said. "Today, I call him one of the most courageous people I ever met."

In the wake of confederate monuments being toppled recently across the nation this summer, some posters on social media have suggesting erecting  replacement statues to honor the legacy of Lewis for breaking down barriers to racial equality.

After the May 2020 brutal killing of George Floyd by a white police officer in Minnesota, sparked the new wave of protests across the nation, Lewis told CBS This Morning in June that the Black Lives Matter movement feels “different” because it is “more massive and all inclusive” than many other protests for racial equality. He predicted, “There will be no turning back.” 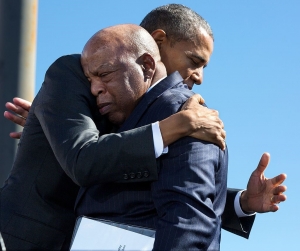 Known for his powerful oratory skills in the House, he spoke against not only racial injustice, but injustice for all. After  a mass murder at a gay nightclub in Orlando, he led a sit-in on the House floor calling for national gun control, though that effort was unsuccessful.  He refused to attend the inauguration of President Donald Trump, blaming Russian interference in the election.

Trump denigrated Lewis in a Twitter post, stating he should spend more time “fixing” conditions in a “crime-infested” district. Trump astoundingly deried the leader who galvanized passage of the Voting Rights Act as “All talk, talk , talk – no action or results. Sad!”

But other political leaders on both sides of the aisle have praised Lewis profusely.

Every year, Lewis has returned to Selma for an anniversary march, joined by civil rights leaders and presidents in both political parties including George W. Bush, Jimmy Carter, and Barack Obama.

Former President George W. Bush issued a statement today after learning that Lewis has died.  “As a young man marching for equality in Selma, Alabama, John answered brutal violence with  courageous hope. And throughout his career as a civil rights leader and public servant, he worked to make our country a more perfect union 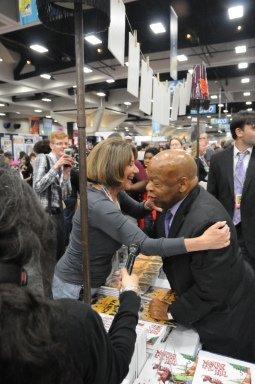 . American can best honor John’s memory by continuing his journey toward liberty and justice for all.”

Congresswoman Susan Davis (D-San Diego) posted on Facebook that Lewis had a special relationship with many high school students who visited the Capitol, always willing to share his inspiring story, “What a loss to all w felt John Lewis’s courage and greatness as he urged us to make `good trouble.’ I am both profoundly saddened and grateful to have spent work days and pilgrimages with him as he led us through the fight for civil rights for all.”

Former Vice President Joe Biden, the Democratic presidential nominee, issued this statement.  “I know of no man with more courage than John Lewis. He was a giant walking among us. When I saw him, I couldn’t help but think one thing: `I haven’t done enough.’ May his life and legacy inspire every one of us to strive for justice, equality, and what is right.”