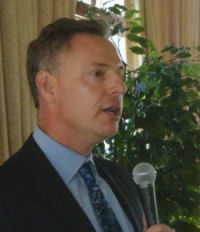 February 7, 2013 (Washington D.C.) – This week marks the completion of Congressman Scott Peters’ first month in office. Since Peters was sworn in on January 3rd, he has been appointed to two key committees, helped introduce bipartisan legislation to repeal burdensome medical device taxes, and voted to improve Congress’ preparedness and accountability.

“It’s been a whirlwind of a month,” said Peters. “Moments after I was sworn in I started working on the promises I made to the people of San Diego: more government accountability, protecting our small businesses and manufacturers, supporting our military, and investing in our economy. When I’m not in DC, I’m in the District listening to what San Diegans care about most. I’ve met with veterans, active military, small business owners, scientists, students, and business leaders to ensure I stay in touch with the needs of the people I was elected to serve.”

According to his staff, one of Peters’ most important accomplishments during his first 30 days was cosponsoring the “No Budget, No Pay” Act. Peters has been a vocal opponent of the gridlock in Washington and has made it a priority to get Congress working again. This bill holds Congress accountable by suspending members’ pay if a budget is not passed. Last week this bill passed the Senate and is expected to be signed into law by president Obama.

This week, to continue following through on campaign promises to his district, Peters will help introduce the bipartisan Protect Medical Innovation Act. This act reforms the Affordable Care Act by repealing its approximately $30 billion Medical Device Tax. There are 240 medical device companies based in San Diego. This tax would hurt patient access to cutting edge services and the ability for the health care sector to compete in an innovative way by costing more than $8 billion in lost economic output and approximately 39,000 jobs nationwide.