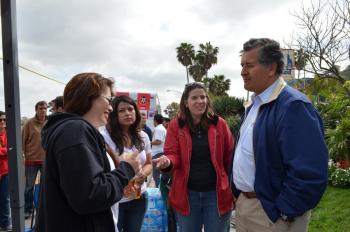 April 7, 2013 (San Diego) Updated April 8 with statement by Evolution Hospitality—East County residents and Congressman Juan Vargas (D-51), whose district includes the border areas in East County, turned out yesterday in support of low wage workers staging a hunger strike at the Mission Valley Hilton. Vargas spoke with ECM on immigration reform and how it applies to this situation.

The workers want the right to organize a union and collectively bargain for a labor contract. Employees contend that management is using immigration status to selectively threaten union organizers—while at the same time outsourcing housekeepers’ work to undocumented workers paid more than long-time employees.

According to Alma Romero, a resident of El Cajon and one of the organizers of the hunger striker, “we started the campaign to unionize the hotel a year ago.” 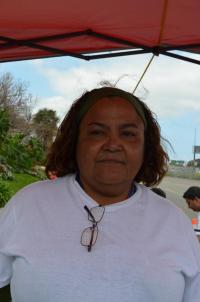 One reason for this was that the hotel management was offering workers three days of work, while hiring outside contractor workers who were working full time. “They are giving them up to six days,” said Romero (photo, right).

That’s not because outside workers are cheaper. In fact, that’s not the case, Romero said.  “Housekeeping staff from the agency make nine dollars an hour, and hotel employees make eight dollars an hour.”

None of the workers have any benefits, such as health care. Moreover, and why she decided to go on a five day hunger strike, the workers who come from the agency are undocumented workers, according to her.

The original company that this organizing campaign started with is HEI Hotels.  But HEI sold out to Evolution Hospitality recently.

Regardless, workers claim that hotel management, regardless of ownership status, pressures workers to each do the job of two or three workers, employees claim. For example, housekeeping staff is required to do 16 rooms daily--cleaning, sanitizing, making the bed, vacuuming, in eight hours.

Romero was not the only worker to point this out. Many others did yesterday as well. They also alleged mistreatment, verbal abuse, reprisals and a general environment of fear. Chiefly, they claim that the company has used E-Verify as a tool to remove union organizers from the hotel, as the latest tool to stop a lawful organizing effort.

ECM asked hotel management for comment and on April 8, received the following response from Evolution Hospitality:

"Since Hilton Mission Valley became an Evolution Hospitality managed hotel on March 21, we have taken positive and proactive actions to ensure our new associates’ welfare, beginning with hiring every hourly associate. We have also provided significantly improved health and welfare plans at a lower cost to associates, implemented Evolution Hospitality standard practices to ensure employees can work safely and efficiently, and listened and heard each associates’ need for new equipment and supplies, providing them with most of the items requested immediately. We did these things because we care about our associates, not because of external pressure by any outside organization that claims to represent our employees.

Some political leaders at the event contended that the problems at the hotel provide a textbook example of why immigration reform is needed. 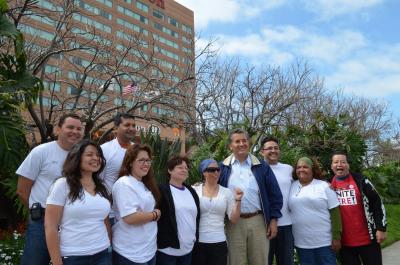 n Vargas told the workers, “It is a shame what the hotel is doing.” These are long term workers, he noted, “who helped to build the business, who are facing dismissal…It is an outrageous situation.”

Migratory status is being used as a threat to keep people afraid, Vargas suggested. He said that in the history of this country, “We had slavery, indentured servitude and now immigrants who are being abused by employers.”

Congressman Vargas is planning to sponsor legislation for an emergency amnesty for all workers in the United States, he revealed.

“These are good, hard working people,” said Vargas. He added that amnesty will “remove the pressure from these people.”

ECM asked the Congressman about the status of migratory policy in Washington.

Vargas told ECM, “There is consensus among Democrats, as well as many Republicans. What is holding any advance is the Tea Party,” whose members 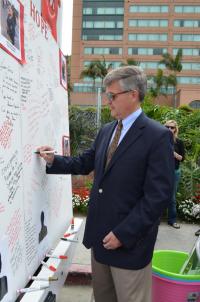 ECM also had an opportunity for a short talk with County Supervisor Dave Roberts. We asked him about immigration. He sits on the National Immigration Reform Task Force. He replied, “I am hoping our Federal Government can come up with a bipartisan solution that works.”

He added that the problems we are seeing at places like the San Diego Mission Valley Hilton “are not just countywide issues, but nation wide issues.” He also said that “ What affects one of us, affects all of us, and we need to work to find a solution.”

Vargas told ECM that “Kim Jun Un, he is 28 years old. He’s inexperienced, and having that much power and nuclear weapons is dangerous.” He added that with so many military assets moving into place, “Any spark could restart hostilities.”