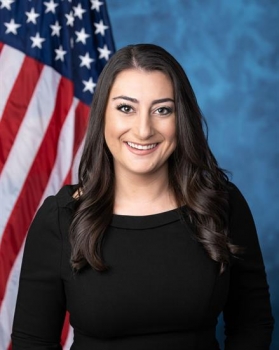 May 23, 2021 (Washington D.C.) -- Congresswoman Sara Jacobs (D-CA-53) expressed concern over the prospects of a peace deal in Afghanistan during Tuesday’s House Foreign Affairs Committee hearing on the US-Afghanistan Relationship earlier this week. At the hearing, Congresswoman Jacobs directed her questions to The Honorable Zalmay Khalilzad, Special Representative on Afghanistan Reconciliation, U.S. Department of State.

Congresswoman Jacobs expressed support for withdrawing from Afghanistan, but questioned Ambassador Khalilzad on the challenges ahead, and asked for more details regarding the Administration’s plan for peace and the reliability of Pakistan as a partner.  Her questions also referenced recent statements by the President of Afghanistan, Ashraf Ghani, who said, “the US now plays only a minor role, the question of peace or hostility is now in Pakistani hands.”

Video of her comments and questions available here.

Congresswoman Jacobs: I have the privilege of serving on both this committee and the Armed Services Committee, so I’ve been following this issue and the communications around the peace plan very closely. I want to say first, I'm very encouraged by the administration's decision to withdraw. I think it was the right decision. I represent a proud military community. And I think it is the best way that we can honor the sacrifices that they've made. However, I'm still concerned about the prospects for a viable peace deal. We know that there are a lot of challenges remaining, including getting the Taliban to go to Istanbul, moving the needle on a potential Afghan interim government, full cooperation with Pakistan, etc. So Ambassador Khalilzad, how do we overcome these many challenges to produce a sustainable peace plan?

Ambassador Khalilzad: Well, we just persist in using all the tools that we have in our toolbox, to make progress appeal to their self-interest to begin with. Use our leverage with them. What we have in the current circumstances, to encourage accelerated negotiations and encouraging positive support for that negotiations from Pakistan, as you mentioned, the one of the countries with influence, leverage over the Taliban. And, of course, work with the Afghan parties, both the Talibs, we're in a unique position that we have a partnership with the government, and we also one of the principal interlocutors with the Taliban. And there are things the Taliban want from us. And that provides us with leverage as well, they want prisoners released from the government, that provides the government with leverage, they want de-listing from the UN and our de-listing, that provides leverage as well. So, yeah, I wish there could be a magic solution that we could turn things quickly around. But the war has gone on for a long time, people have gotten used to it, some profit from it. You can count on us to be persistent in pushing and using the leverage and the toolbox that we have.

Congresswoman Jacobs: Yes, well, I do appreciate your persistence. I want to drill down on this question of Pakistan. In an interview on the 14th, President Ghani said that peace will be primarily decided by the region, and it is about getting Pakistan on board. And he said, and I quote, “the US now plays only a minor role, the question of peace or hostility is now in Pakistani hands.” That is quite the statement. And I share many of my colleagues’ concerns about the reliability of Pakistan as a partner in this, and I know you have expressed optimism that they will step up. And I was wondering if you could speak more about what specifically you're going to do to push their leaders and ensure that they do step up the way we want them to.

Ambassador Khalilzad: President Ghani is right in the sense that the region is important for a peace agreement to bring stability, lasting stability to Afghanistan, it needs broad support inside the diversity of Afghanistan; men, women, ethnic needs to be reflected; and have support, but also the region. But part of Afghanistan's problems has been it has been kind of a scene of proxy, regional proxy conflict. And so therefore, the role of the region is important. And we're trying to build regional consensus as part of the international consensus and support for peace. And this economic dimension that I have emphasized repeatedly, the potential connectivity and trade between Central Asia, Afghanistan and South Asia is as vital, in my judgment, is a vital part of the future of that region and for Afghanistan. But also important when trying to absolve Afghans of their responsibility. And they have to come to accept each other and find a formula where they can resolve their differences. And on Pakistan, on General Bajwa and Prime Minister Ghani recognize in my view, that this economic benefit is where the future is. General Bajwa said “countries don't develop regions develop.” And I know there are challenges inside Pakistan. But I believe this last visit was positive, that General Bajwa had to Kabul, they have discussed some steps that the two sides will take. We're working with the United Kingdom in support of the effort that the relation between these two countries improve, that relationship been as has been the Achille’s heel of Afghanistan’s recent history and needs to be overcome. And we will see, but we're hopeful given the recent developments.