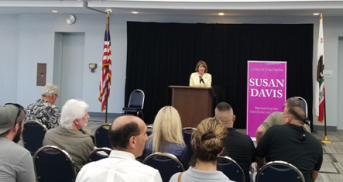 August 7, 2017 (El Cajon) -- With the United States involved in war campaigns in the Middle East, Europe and Southeast Asia over the past century, there are U.S. soldiers who have returned home visibly unscathed by the hell of war. But there are those soldiers who have returned home healthy on the outside, yet everyday continue to deal with the ravages of war on the inside, enduring post-traumatic stress disorder and other challenges.

The town hall was inspired by a recently released bestseller book called Tribe: On Homecoming and Belonging (Twelve Books) by bestselling author Sebastian Junger.  The event, a second for Davis as a part of her local district outreach to veterans, featured veterans who served the country from World War II, Viet Nam, Iraq, and Afghanistan. Similar such community events have been held by other House Representatives in districts around the country. The first event in San Diego was held in November 2016.

In his book, Junger says that during times of turmoil and suffering, many people in communities experience a greater sense of loyalty, cooperation, and reliance with one another – the same qualities associated with “good soldiering.” Within this paradigm, for veterans and civilians alike, being in the middle of a war feels better than peace, adverse experiences can turn out to be a blessing, and enduring disasters are sometimes remembered more fondly than weddings or tropical vacations. 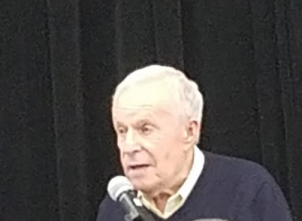 Yet, many who return from the warfront lose that sense of camaraderie once they return home and enter the civilian world and begin to struggle with depression and/or begin using alcohol or illicit drugs to tamp down their internal struggles, or resort to suicide.

“Tonight, in the tradition of modern warrior storytelling, veterans and veteran’s families describe the pride, the grief, the rage, or quiet appreciation of why that and war bestowed on them,” Representative Davis said to the some of the one hundred people gathered at the center.

Davis acknowledged that the format of the special veterans’ town hall was the inspiration of Rep. Seth Moulton (D-6), himself a former U.S. Marine Corps officer who spent four tours of duty in Iraq and earned a bronze medal for his participation in the Battle of Najaf against the forces of Muslim cleric Muqtada al-Sadr. She said that Moulton developed the veteran storytelling events “to bring the stories of warriors to the public.”

“This is simply a chance for our veterans to tell their community what it felt like to go to war,” Davis continued to say. “This is also an opportunity for the community to validate our warriors and their families. We are returning the experiences of war to our tight communities so they don’t have to bear it alone.”

Eighteen veterans shared their stories at the event, including 93-year-old U.S. Army Vet, Harry Kaplan. He served from 1943 to 1945 as a bomber vet and was drafted several short months after finishing high school.

“That summer after graduating I was processed and started training as a radio operator gunner in Sioux Falls, North Dakota after living my whole life in New York City,” he said. Kaplan went on to gunnery school in Yuma, Arizona. “That’s when I learned that my outfit was being trained to go someplace in Europe. I washed out as a pilot because I couldn’t withstand the pressure chamber,” he stated. Kaplan concluded that unlike the reception experienced by veterans who returned from Vietnam, World War II vets “were treated royally.” “We were thrown block parties,” he said. “Everyone was involved in World War II. Everyone chipped in. I can’t emphasize the togetherness as it was.”

Another notable talk during the evening was given by Thea Ventimiglia, the only female veteran to speak. Upon retiring from service in Iraq as an Air Force Statistics Officers from 2006 to 2010, she relived another form of discrimination from civilians similar to what was experienced by veterans of the Vietnam war. During her tour of duty, she said she did not experience sexual and gender harassment, but didn’t expect to experience harassment in her daily job back home because of her military service. “What does a combat veteran look like?” she asked. “We all have in our mind images of what they might be. She or he might be male or female, white, brown, or black. She or he might be Muslim, atheist, or Christian. She or he might be an immigrant or a resident. Why does that matter? Unfortunately, people still discriminate in 2017 in the United States, here in California or in our community in San Diego where I live and work. I hate to break this to you, but there are people who hate veterans who served in Operation Iraqi Freedom,” Ventigmilia said.

She said there are those who are not afraid to vent their animosity about the war to those who served in Iraq, because no weapons of mass destruction were found and that somehow their service was ethically wrong, “did not do anything good, or are not doing anything good now.” She added, “I know this because I have experienced this first hand at work. I didn’t expect to be subject to harassment or ridicule because of my service.”

Ventimiglia said that in the present political climate most people are quick to base their opinions of the war on what they have seen on television or in a movie house. “They decided to take out their frustration out on me because of my service.” Ventimiglia concluded her talk with a message to her fellow military veterans not to tolerate harassment or ridicule in the workplace and to report such instances to human resources personnel. “This type of abuse in the workplace is illegal. Please do not be afraid to report these violations of law,” she urged those present.

The City of El Cajon has established a Veterans Commission which acts as an advisory group to the City Manager and City Council and can be contacted at (619) 441-1756.