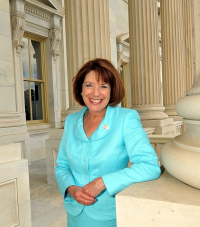 Davis held a roundtable discussion with local economic experts and San Diegans who are struggling to find employment to hear how unemployment benefits help them in their effort to find work.

“The stories heard today remind us of our duty, as a country, to lend a hand to those in need. Any one of us could someday be in their shoes,” said Davis, a member of the House Committee on Education and the Workforce.  “As our economy begins to speed up, now is not the time to let up on the gas. This unemployment insurance helps people pay for gas to get to interviews, get copies of resumes and pay for the phone calls to follow on job leads. Congress should vote immediately to extend these benefits.”

Congresswoman Susan Davis, who has been an outspoken advocate for renewing unemployment insurance and a cosponsor of legislation in the House to extend benefits, hosted the roundtable at her San Diego office. Davis was joined by Peter Callstrom, President and CEO of the San Diego Workforce Partnership, and Mark Nanzer who is the Adult Programs Team Director for the Partnership.

The Partnership provides people with employment resources they may not know are available to them. It is important that people know help is out there for those looking for work.

Davis, Callstrom and Nanzer heard from Eugene Beronilla, who has been unemployed for nearly a year and a half. Beronilla was previously an evaluation specialist at SDSU Research Foundation & consultant at Children’s Hospital in Los Angeles. Beronilla told Davis how he has exhausted retirement and savings and how bills are now unsustainable for him without unemployment insurance.

Another San Diegan who told her story was Joy Dauda, who lost her job of six years as a flight attendant, then lost her house and car. She is currently homeless. Duada talked about the challenges and stigma of trying to find work while homeless. An extension of benefits would allow her to stay focused full time on her job search.

On December 28, 2013, long-term unemployment insurance expired for more than a million Americans. To not renew the benefits would be unprecedented. Historically, Congress has renewed these benefits until the percentage of the long-term unemployed dropped to around one percent or lower of all unemployed. The current rate is nearly three percent.