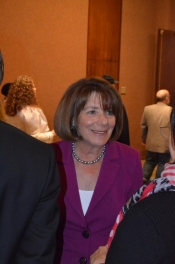 “This joint Israeli-U.S. project is already in the field, having successfully downed nearly 90% of incoming missiles during last year’s conflict in Gaza.  Hundreds of innocent lives were spared as a result of Iron Dome and rocket fire from the Gaza strip did not escalate into a larger crisis," Davis states. “However, the coverage provided by the Iron Dome defense system is inadequate and regional security requires additional units to protect all of its civilian population.”

She adds, “For these reasons, I have introduced legislation authorizing the President to provide assistance for the procurement, maintenance, enhancement, and sustainment of additional Iron Dome defense systems.”

Baloney. Iron Dome is simply another reason to waste money on Israel.

First, attacking $800 rockets with $60,000 missiles makes no sense, even if they were effective.

Secondly, Iron Dome is not effective. Critics say explosions in the sky are hailed as evidence of success when the blasts in most cases simply represent interceptor warheads blowing up.  Theodore A. Postol, a physicist at M.I.T. who helped reveal the Patriot antimissile failures of 1991, analyzed the new videos and found that Iron Dome repeatedly failed to hit its targets head-on. He concluded that the many dives, loops and curls of the interceptors resulted in diverse angles of attack that made it nearly impossible to destroy enemy warheads. “It’s very hard to see how it could be more than 5 or 10 percent,” Dr. Postol said.
http://www.nytimes.com/2013/03/21/world/middleeast/israels-iron-dome-sys...

So Congresswoman Davis is simply wasting taxpayer money in an attempy to garner Jewish votes.