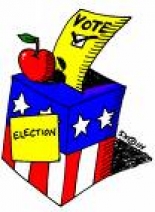 The Federal Election Integrity Act would prohibit a chief election official of a state from serving on federal campaign committees or engaging in other political activity on behalf of federal candidates in any election over which the official has supervisory authority.

“Imagine if someone could be both the coach and the referee in a game,” said Davis.  “That would certainly not be fair.  So why would we then allow one person to both officiate an election and chair a candidate’s federal campaign committee?  Someone who has a vested interest in a federal campaign should not also be able to oversee an election in which that candidate runs.  Congress needs to take this long-overdue step to restore the faith of the American people in the election system.”


Recent elections have brought examples of leading state election officials with disturbing conflicts of interest.  In some of these cases, chief state election officials have held official positions on the campaign committees of federal candidates, such as state committee chair. Such conflicts occurred in some of the most contested elections in U.S. history including close races in Florida and Ohio for the presidency.

Davis is deeply concerned that this fundamental conflict of interest prevents that official from ensuring a fair and accurate election and could undermine the integrity of federal elections. The Federal Election Commission would oversee enforcement and could issue fines for violations of the law.

In 2010, the House passed the Election Integrity Act on a bipartisan vote of 296-129. The Senate failed to act on the bill before the end of the 111th Congress.