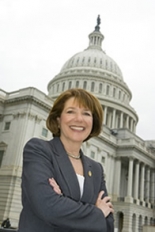 October 12, 2013 (Washington D.C.) --As the economically damaging government shutdown entered its 12th day, Congresswoman Susan Davis (D-San Diego) took an extraordinary legislative step to bypass the Speaker of the House and force a vote to open the government.

“A majority of the Congress wants to end the government shutdown and stop the economic harm it is causing,” said Davis. “Legislation to open the federal government is sitting on the Speaker’s desk, having passed the Senate two weeks ago. Unfortunately, he won’t let the House vote. This move will apply the necessary pressure to force a vote to end the shutdown.”

Davis joined her House colleagues in signing what is known as a discharge petition to require the Speaker to bring the Senate-passed government funding bill to the House floor for an immediate vote. If a majority of the House signs the petition, a vote would be scheduled.

Davis feels a strong sense of economic urgency in ending this shutdown. In the San Diego area, more than 30,000 federal workers have been furloughed. Recent analysis estimates that the government shutdown will cost San Diego $7 million a week.

According the Congressional Research Service, seven discharge petitions have received 218 signatures over the last 30 years. And in all seven cases, the majority party agreed to bring the measure to the House floor.

So far, House Democrats have signed the petition but no Republicans have joined in. At least 18 Republican signatures are needed for the measure to succeed.