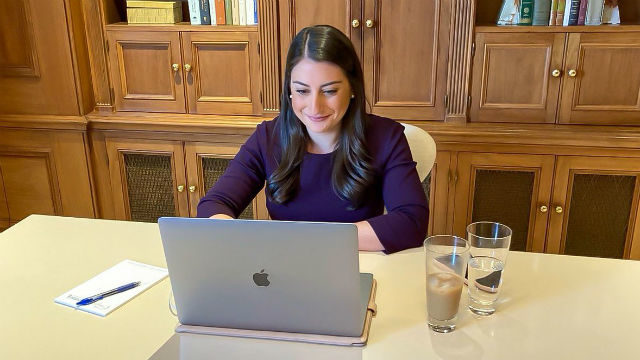 printed from Times of San Diego, a member of the San Diego Online News Association

Photo: Sara Jacobs during a recent virtual meeting, via her Twitter feed

Jacobs, a Democrat who won election in November to succeed retiring Rep. Susan Davis in the 53rd District that includes much of East County, is the only freshman member of congress to be nominated to the committee, which is responsible for oversight and legislation relating to all aspects of U.S. foreign policy.

It’s the second committee placement for Jacobs, who was earlier nominated to the House Democratic Steering and Policy Committee.

“I am honored to serve California’s 53rd Congressional District on the House Committee on Foreign Affairs,” said Jacobs. “I look forward to bringing my experience in U.S. foreign policy and international organizations — and my voice as a millennial who has never known a day in my adult life that the United States has not been at war — to the committee as we work to rebuild America’s standing in the world.”

Jacobs served in the State Department during the Obama administration and in the Department of Peacekeeping Operations at the United Nations. She was most recently a scholar in residence at the Joan B. Kroc School of Peace Studies at the University of San Diego.

The 53rd District extends west from I-5 and Balboa Park to East County and south to Chula Vista, encompassing much of the city of San Diego.