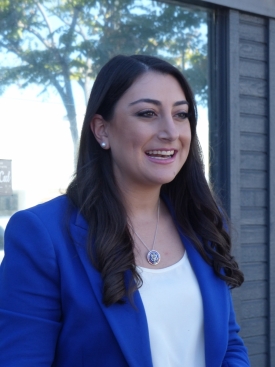 November 13, 2021 (El Cajon) – Congresswoman Sara Jacobs (D-53) stopped by downtown El Cajon on Wednesday to speak about how passage of the infrastructure bill could impact our region. In a tour coordinated with the East County Chamber of Commerce, Jacobs also met with local business owners to hear about their needs as the economy emerges from pandemic.

“We here in San Diego are well placed to receive a lot of funding from this bill,” Jacobs said in a press conference outside of Rob’s Brewpoint, a new coffee shop opened during the pandemic.

Through formula funding, California is expected to receive $44 billion from the Infrastructure Investment and Jobs Act which President Joe Biden plans to sign into law on Monday. San Diego will likely get 8 percent of that for roads, bridges and other infrastructure projects, Jacobs said. “There’s also a competitive grant program,” she added, noting that the Secretary of Transportation will have discretion on how those grants will be disseminated.

Noting that San Diego is the 5th most populous county in the nation as well as an economic and innovation hub, Jacobs said, “I’m going to be working with our state and local officials and with municipal governments here to make sure we are writing as competitive grant applications as possible and getting as much money as possible for San Diego.”

The bill includes the most funding for highways and roads since the Eisenhower administration, as well as the largest investment in rail since AMTRAK was founded, as well as funds for transit, upgrading water supplies and replacing lead pipes, modernizing the power grid and expanding renewable energy cleaning up Superfund sites, adding electric busses and vehicle charging stations, responses to emergencies such as wildfires, upgrading ports and airports, and expanding high-speed Internet, among other things.

“It also will make sure that families have access to broadband, which we know for families here in San Diego is really important,” said Jacobs. “There are so many things in this bill and I’ so excited that we were able to get it across the finish line.”

She noted that “climate change is a huge issue” fueling more severe wildfires and promised to “get those funds out as soon as we can.”

ECM asked Jacobs if the bill’s funds might be spent on any long-sought highway upgrades in East County, such as widening state route 52 or adding safety improvements to highways 67 or 94.  The specific projects to be funded haven’t yet been identified, she indicated.  But once the bill is signed and sent to the Department of Transportation, she anticipates that our region will received around $850 million for roads and bridges, in addition to a competitive grant program that offers potential for local grants.

“I will work closely with local partners to make sure that we get as much funding as possible and that we incorporate local voices” to help determine which projects such be funded, she pledged, adding that her office will help “advocate for our regional grants.” 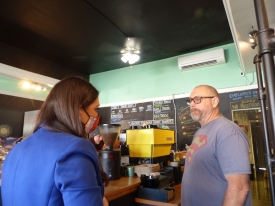 Jacobs noted that the city of El Cajon used American Rescue Plan funds to help local businesses with $5 million in an El Cajon Business Grant Fund “to really serve the community and get those funds out there.”

After the press conference, Jacob sampled a coffee drink from Rob’s Brewpoint and chatted with the owner. 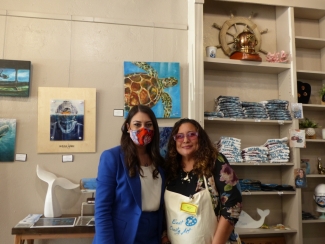 Next up, she visited the East County Arts Association’s new gallery location on Main Street, which had been set to open in early 2020 but had to postpone until this year due to pandemic shutdowns. “The art is great!” Jacobs said.

Linda Baltodano greeted Jacobs warmly at the gallery and thanked her for the funding from the American Rescue Plan grants.  “Now we can have art shows and arts events,” she said.  “We’re so glad to be open!” 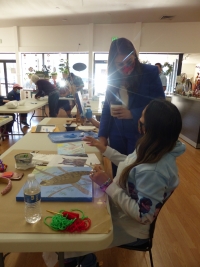 A spokesman for Sophie’s Gallery, where all items sold benefit St. Madeleine Sophie’s Center, also praised the American Rescue Plan.  “We would not have been able to do it without the grant,” he said of the gallery’s recent move onto Main Street into a more spacious location.

The final stop was at Mal Al Sham Taste of Damascus, a restaurant offering Syrian cuisine in El Cajon, a hub for new refugees from Syria, Iraq and Afghanistan. Jacobs is a cosponsor of the Restaurant Revitalization Fund Replenishment Act, 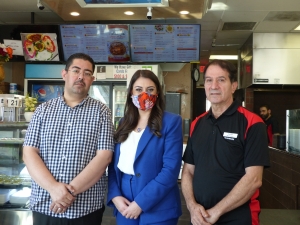 which would infuse $60 billion into the Restaurant Revitalizaiton Fund to help estuarants, bars and other eligible businesses impacted by COVID-19.

Rick Wilson, President and CEO of the East County Chamber of Commerce, said he was impressed with Jacob’s commitment and that she “cares about small businesses, not just big box stores.” He also voiced approval to see “government and businesses owners working together.” 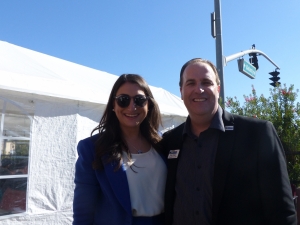