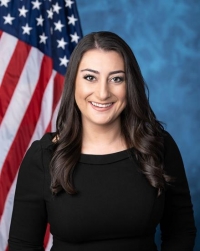 In celebration of these additional hires, Congresswoman Sara Jacobs issued the following statement:

“I’m so excited to build out our staff to serve the 53rd District and to highlight our newest hires for the community. We have so many urgent priorities ahead of us – recovering from this pandemic, investing in our communities and our children, supporting our service members, rebuilding our standing in the world – and I know this team is up to the task.

“These committed and talented public servants represent the best of our district and our country, and I look forward to working with them to deliver for our constituents.”

Karla Alvarado joined the Office of Congresswoman Jacobs as Press Secretary. Karla previously served as the Latinx Media Director for the Runoff Coordinated Campaign at the Democratic Party of Georgia. She also served as a Deputy Press Secretary for the Biden for President Florida Coordinated Campaign. The daughter of Honduran immigrants and a first-generation American, Karla is a Massachusetts native, a native Spanish speaker, and a Harvard University graduate, where she received a bachelor’s degree in Latin American History and Literature.

Paola Guzman joined the Office of Congresswoman Jacobs as Legislative Assistant. Paola previously served in the Office of Congressman Juan Vargas as a Legislative Assistant and before that as a Senior Field Representative, where her portfolio consisted of both legislative expertise and field operations surrounding issues of border affairs, immigration, and environmental policy. Prior to working in government, Paola worked for the American Civil Liberties Union of San Diego and Imperial Counties and is a graduate of the University of California, San Diego, where she received a bachelor’s degree in Political Science and a master’s degree in International Affairs. Paola is a native San Diegan and still considers CA-53 home.

Sophie Jones joined the Office of Congresswoman Jacobs as Legislative Assistant. Sophie previously served as Legislative Aide and Floor Coordinator on the House Foreign Affairs Committee under both Chairman Engel and Chairman Meeks. Hailing from Arizona, Sophie attended the University of Arizona as a first-generation college student and graduated with a bachelor’s degree in Political Science. She also holds a master’s degree in Security Policy Studies from the George Washington University.

Jane Le joined the Office of Congresswoman Jacobs as Staff Assistant. She received her bachelor’s degree in History from the University of California, Riverside and her master’s degree in Public Administration from California State University, Northridge. Before entering a career in public service, Jane worked for the San Diego Diplomacy Council, where she helped coordinate the International Visitors Leadership Program (IVLP) and welcomed international delegations to San Diego. Jane is a proud 1.5 generation Vietnamese American, born in southern Vietnam and fluent in Vietnamese. She enjoys reading, cooking, hiking, and spending time with her husband and son at national and state parks.

Korral Taylor joined the Office of Congresswoman Jacobs as Community Representative. Raised in the 53rd District, Korral graduated from Bennett College in Greensboro, North Carolina with a bachelor’s degree in Political Science. Upon her return to San Diego, she began teaching at a local elementary school while also working for Congresswoman Jacobs’ campaign. Korral enjoys participating in fitness challenges and trying new cuisines in and around the San Diego area.

David Vance joined the Office of Congresswoman Jacobs as Community Representative. David began working in community organizing and activism when they first moved to San Diego in 2014, with a focus on LGBTQ+ issues. They previously held positions at the San Diego LGBT Community Center and the UC San Diego Antiviral Research Center, specializing in topics such as access to health care and transgender/nonbinary rights. Originally from rural Wisconsin, David received a bachelor’s degree in English from Kenyon College.