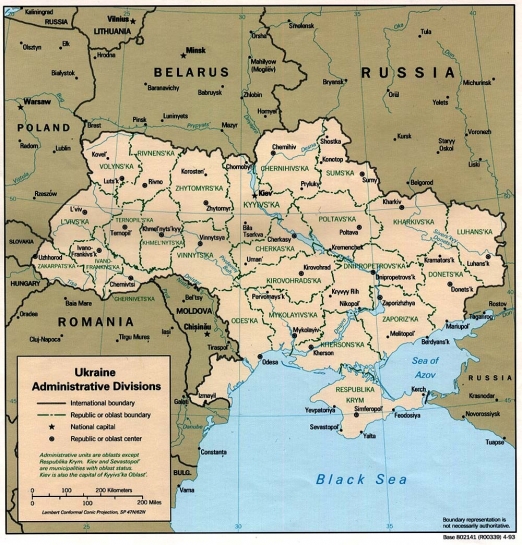 Photo: Map of Ukraine, cc by NC via Bing

January 25, 2022 (San Diego) – Fears that Russia aims to invade the Ukraine have grown in recent weeks, after Russia sent an estimated 100,000 troops to the Ukrainian border, staged military exercises and demanded that NATO deny admission to the former Soviet-bloc nation. The U.S. has sent arms to the Ukraine and has warned Russian President Vladimir Putin of severe sanctions if he orders an attack on the Ukraine, which U.S. President Joe Biden says would be “the largest invasion since World War II. It would change the world.”

Today, San Diego Congresswoman Sara Jacobs (D-53) announced she will travel to the Ukraine and Belgium this week as part of an official, bipartisan congressional delegation organized by Chairman Gregory Meeks of the House Foreign Affairs Committee. The bipartisan delegation will meet with NATO allies and European Union counterparts to discuss the increased threat of Russian military action in Ukraine.

Jacobs is a member of the House Foreign Affairs Committee and the House Armed Services Committee.

“I am looking forward to meeting with NATO, EU, and national officials this week in Belgium and Ukraine. It is imperative that we support an international order based on the right of people to choose their own future,” Congresswoman Jacobs said in a statement released to media. “I condemn Russia’s destabilizing actions in Ukraine and intend to push for continued diplomatic efforts to de-escalate this crisis, because an escalation into armed conflict would be disastrous for everyone involved, particularly the Ukrainian people.”

May we please consider ceding: Arel, Bremmer, Charnysh, Crimea, Donbash, Kulyk, Hale (all Russian speaking) The 120,000 Russian troops should be enough to keep the peace.

And keep as Ukraine (I don't know if we're looking for 120,000 troops) same as Russia- women peace keepers are less likely to rape people and better de-escalators according to Angelina Jolie and in all international affairs, as per President Joe Biden, "do unto others what you would have them do unto you" we want to ensure their women are protected, and keep the peace in Ukraine: Barrington and Herron, Birch, and D'Anieri, Darden and Grzymala-Busse, Himka, Kiev, and Peisakhin.

This is a dangerous and scary time in which we all should be using cooler heads. What is happening in Ukraine could have worldwide implications!