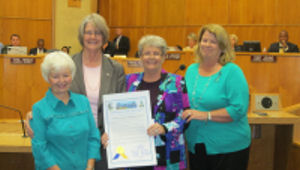 September 22, 2011 (San Diego)--To recognize the efforts of the Ovarian Cancer Advocacy Alliance of San Diego (OCAA) to effect change in the way medical doctors consider diagnosis and treatment of ovarian cancer by educating the medical community, patient organizations and the community at large, Congresswoman Susan Davis and the City of San Diego issued Proclamations declaring September 2011 as Ovarian Cancer Awareness month.
Peg Ford, Chair of OCAA in partnership with the Ovarian Cancer National Alliance, launched the “Survivors Teaching Students: Saving Women’s Lives” Program in 2008 which brings volunteer ovarian cancer survivors into the classrooms of medical school students to increase awareness of the symptoms and risk factors for early detection.
To date, a total of 400 third year medical students, 72 residents in OB/GYN Residency and Family Medicine Residency Programs at UCSD School of Medicine and 39 nursing students at Azusa Pacific University School of Nursing have been reached through the program. Expansion plans are underway to implement the program in all nine schools of nursing in San Diego County.
In addition OCAA’s Chair, Peg Ford, has collaborated with the esteemed Gynecologic Oncologist, Dr. Afshin Bahador, to participate in his Grand Rounds for Continuing Medical Education (CMEs) for practicing physicians at various Scripps Healthcare and Sharp Healthcare Hospitals in San Diego, reaching a total of 353 Medical Doctors and Healthcare providers since 2009.
There was special meaning for the team members in attendance at the San Diego City Council Meeting on September 19, 2011, as the Proclamation was presented by District 1 Councilmember Sherri S. Lightner in memory of two of fallen heroes, Pat Marelius and Judy Dalton-Galliher who lost their gallant battle earlier this year. Even with fighting for their lives, they attended the training session in preparation to present for the program. Judy never got the chance to share her story as she passed on Mother’s Day, three days before she was to make her first presentation. Pat did present once to third year medical students before losing her battle to cancer on Father’s Day.

District 7 Councilmember, Marti Emerald graciously shared her personal family member loss to ovarian cancer. In their honor, their surviving sisters (team members) will continue to share their stories in the “Survivors Teaching Students” outreach program with the goal to save more women’s lives.