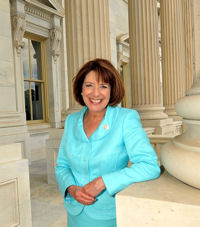 March 8, 2012 (San Diego)-- Upon filing the necessary paperwork with the San Diego County Registrar of Voters, Congresswoman Susan Davis qualified for the 2012 ballot making it official that she will be running for re-election in the newly drawn 53rd Congressional District.

Davis says she is enthusiastic about the possibility of representing the communities of East Chula Vista, La Mesa, Mt. Helix, Bonita and El Cajon that were added to her San Diego-based district through the redistricting process. “It will be exciting to meet new faces and engage more with communities in East County and the South Bay,” she observed. “My experience as a social worker, youth leadership program director and military spouse taught me the value of integrity, justice and responsibility.  It also taught me the importance of fighting to restore an economy where everyone gets a opportunity to live the American Dream.  Working in our community - with Democrats, Republicans, and Independents - to create common sense solutions has long been something I truly enjoy.”

Davis said she will continue her focus on improving the economy and boosting middle class prosperity.  She sees creating a world-class innovative education system and protecting consumers and homeowners as keys to rebuilding the economy and reigniting the American Dream.
In Congress, Davis serves as the Ranking Member of the Military Personnel Subcommittee and has championed the cause of the service members, veterans and military families we count on for our freedoms.  Davis has also been a leader in holding government accountable and reducing the influence of special interests in government and our elections. Prior to Congress, Davis served in the California State Assembly, was President of the San Diego Unified School Board and directed the Aaron Price Fellows program, a leadership program for area high school students.
Davis, a Democrat, was elected to Congress in 2000, after upsetting a three-term incumbent in a Republican year. She has never lost an election.  Since her first election to Congress, she has always received at least 62% of the vote and is known as a hard-working grassroots campaigner.
Republican Nick Popaditch, a former Marine and author who was previously defeated running against Congressman Bob Filner, has filed papers to run against Davis in the race.
Popaditch stated on his website, “ I  love my country. Too many people have fought too hard for our prosperity and liberty for our generation to give those away on our watch. There is an expression that directs, “Lead, follow, or get out of the way.” I am choosing to lead.”
The new 53rd Congressional District has a 14% Democrat registration advantage over Republicans.  In 2008, President Obama won 61% of the vote in the new district while Republican John McCain picked up 36% of the vote.