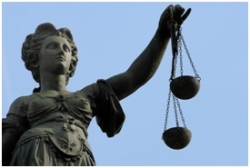 Davis believes it is time to bring this common sense protection to LGBT jurors nationwide. The Juror Non-Discrimination Act was introduced with 14 original cosponsors.