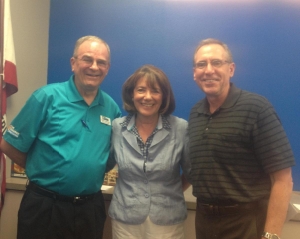 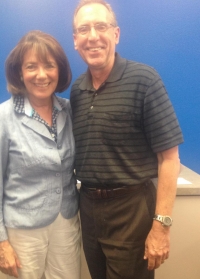 Barry Jantz from the Chamber’s governing affairs committee oversaw the event, filling in for General Manager Eric Lund.  Jantz noted that Congresswoman Davis is the longest serving representative in our area, having served  in the State Assembly from 1994-2000 and in Congress since then.

Before beginning the dialogue with the public, Davis provided several updates.

She mentioned a grants workshop at the Old Globe in Balboa Park for businesses to come together on August 11 at 9:30 a.m.

She also mentioned the veterans community representative from her office, Mark Zambon, who is doing veterans’ issues and also working in El Cajon.

Next, Davis talked about the San Ysidro expansion (land port of entry) project. “Lines are much shorter now,” said Davis, adding that traveling back and forth by cars has become easier.

Then, she updated everyone on funding for the National Institutes of Health (NIH). “It’s not a large increase, but it’s better than it was,” she indicated. The 21st century Cures act was passed to bring more money for NIH. According to Davis’ website, she voted for this act “to encourage biomedical innovation and research into new treatments and cures.” (https://susandavis.house.gov/media-center/press-releases/congresswoman-susan-davis-supports-bill-to-boost-funding-for-medical).

Davis talked about the National Defense Authorization Act (NDAA). “The House and Senate came to a conference. A few outstanding issues weren’t resolved,” she stated.  This bill authorizes appropriations and sets policies for Department of Defense (DOD) programs and activities, including military personnel strengths for active duty and reserve forces and more, per the Congressional website. (https://www.congress.gov/bill/114th-congress/house-bill/1735).

Lastly, Davis spoke about how Congress is in the midst of looking at the Iran nuclear agreement. Voting will be on September 7. “It does call for more robust monitoring on the part of Congress,” she said of President Barack Obama’s proposal.

The public then asked questions.

One man asked about desalinization in the Sweetwater water district and what process they use. Davis explained that the Chula Vistas facility uses reverse osmosis like in Carlsbad, “just on a smaller scale.” He also said the bottom line is that “we need water.” Davis responded, “I believe the cost of that and bring gallons of water is about a quarter cost of Carlsbad.” He also wanted to know who was funding it. Davis told him there were grants from the state and federal levels. The Sweetwater facility is slated for expansion but unlike the planned Carlsbad facility, it draws water from aquifers, not the ocean.

Cathy Hilton, a member of the Chamber, mentioned how she’s been hearing concerns about cyber security and hacking. Davis told her, “It’ll be an ongoing problem.”

Jerry Turchin from the El Cajon Planning Commission stated, “The government with foreign affairs gets at least an F” because “on the federal level, we don’t have a clue on handling foreign affairs. It’s virtually impossible to make a living on recycling. How do we get the government out of our pockets?”

Davis said, “The reason responsible folks, like yourself, want to have some kind of standard is so other people can play by the rules. The difficulty is regulation.”

Turchin also brought up how there’s been an issue opening up Panera Bread on Fletcher Parkway in El Cajon. Davis said, “The way we respond depends on what the problem is… People have to be specific about the issue…We’re willing to work with them.” She added that people have mailed in letters and they respond back.

Another man brought up how there was a tragic shooting of a woman in San Francisco last month by a man who had previously been deported several times. He said there’s not just one cause to blame. He also tied in Kate’s Law, which would require “local law enforcement officers to turn over to ICE any illegal aliens with a criminal background. Essentially, it would prevent any illegal aliens with felony convictions from hiding in sanctuary cities.” (http://www.examiner.com/article/kate-steinle-kate-s-law-and-bill-o-reilly). Kate’s law is being proposed and Congressman Duncan Hunter proposed the sanctuary city portion.

Davis told him, “We see these terrible, terrible things that happen. It’s a big issue. There has to be accountability… I think people have a right to explore that issue… There should’ve been more oversight.”

Carol Quidort, another Chamber member, said how concerned she was about immigrants here in East County, which have been putting an overload on schools, apartments/homes, and welfare. She wanted to know the checks and balances of all immigrants coming into East County.

Davis told her, “I think this is some sort of age-old problem. Schools have funding, but schools aren’t funded enough. We don’t really have what we need for all kids… I think we have to look at larger problems in communities.”

Hilton added, “Communication is a humungous problem… I don’t think my government is utilizing technology properly… We can always do things better.”

Roger Roberts of Berkshire Hathaway said, “In my view, my Congress is our board of directors for our country.” He then brought up the nation’s $18.3 trillion debt.

Davis answered, “We can look at what happens at other countries, so it’s a fair process. We haven’t gotten that dialogue going. We’re looking at a possible budget concurrences resolution that will continue with what we’re doing,” she said but added that cooperation is needed.

Katie Dexter of Communities Against Substance Abuse and Lemon Grove School District board member brought up legalization of marijuana and the impact on youth. “As a school board member, it’s difficult to educate kids who are high. Where do you stand on that front?”

Davis said, “I’ve been a supporter of medical marijuana.” It hasn’t been dealt with on the federal level, she noted.

Someone else brought up how there’s not enough money for kids and teachers in school districts, yet much money is spent on elaborate buildings for the kids. “What is the federal government going to do about schools spending money on buildings?”

Nobody really thought Congress could do anything.

Davis replied, “What’s most important in school? The teacher.” She also brought up her experience in dealing with parents, and how she didn’t have anyone to turn to when one parent sobbed on the phone one time.

Another man asked about the elementary/secondary education act. This “emphasizes equal access to education, sets high standards for academic performance, and demands a rigorous level of accountability from schools and districts.” (http://www.k12.wa.us/ESEA/). Davis told him, “What’s needed is stem education [and] technology…”

Randy Okamura from AT&T talked about how people have become more interested in expressing views on social media rather than voting at the polls. Davis said that people need motivation, especially during the mid-year elections, “largely young people. Around the country, there’s been difficulty of people voting.” She brought up how in some places, people can’t get an absentee ballot unless they have a doctor’s note that they are sick. Also, pregnant women need to contact their registrar in advance to tell them of their pregnancy if they want to cast ballots without going to a polling place. Davis wants to see reforms to make voting easier.

Someone else asked about the transportation bill, which would continue funding federal highway and public transportation programs at nearly current levels of investment, maintaining federal highway investment at $40.3 billion in FY2015. (http://www.artba.org/newsline/2014/06/16/house-approves-fy-2015-transportation-funding-bill/).  Democrats sought a three-year bill but Republicans would approve just one year. Davis noted, “Gas revenue hasn’t changed. That’s another issue.”

Mary Parra of Mountain Health asked Davis what top three issues she’s most concerned about. Davis said, “At foreign policy level, the Iran deal coming up.  Economics is always a concern. People need to feel they have an investment in the country. What disturbs me is that 1% of our population is in the military.”

Steve Lachman from the Chamber brought up Iran. “I can’t trust Iran. What do you feel is going to occur?” Davis said, “I really don’t know. There’s been disapproval on not moving forward… How do we stop them from having nuclear weapons?”

Davis Johnston the Chamber also asked about the deficit and how to put a dent in it. Davis answered, “We are putting a dent in it… It is changing.”

Visit: https://susandavis.house.gov/ for more information for the Congresswoman.

For more information about other Dine and Dialogues and other events, go to: http://eastcountychamber.org/ and click on events.