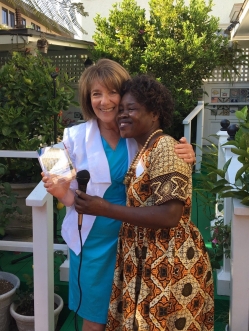 According to Nile Sisters, Davis was chosen “in recognition of a prolific career and tireless advocacy, on behalf of all refugees and newcomers to San Diego County.”

On Twitter, Davis said she was honored by the award, pledging, “I’ll keep fighting for our refugee and immigrant communities.”

Learn more about Nile Sisters and how you can volunteer or support their efforts at https://NileSisters.org.