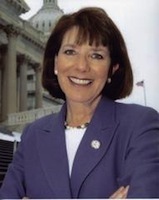 ‘Our children have the right to a learning environment that is free from intimidation, discrimination, bullying and harassment,” said Davis, a member of the committee. “As legislation moves forward, I hope we can find a way to include these basic protections for students. ”

"I applaud Rep. Davis's efforts to protect LGBT youth in schools,” said Walter G. Meyer, author of Rounding Third and anti-bullying expert in San Diego. ”As I speak about bullying around the country, I emphasize that because gay youth are the lowest in the pecking order in schools that if they are protected, everyone else also has a more accepting climate in which to learn. It's not just about protecting youth who identify as LGBT, because 81 percent of the students who are bullied for being gay, are not. So all students have a safer environment if LGBT youth feel secure. A disproportionate number of LGBT youth drop out of school because of harassment, they are four times more likely to commit suicide and although less than 10 percent of the population is gay, 40 percent of the homeless teens are gay."

While Federal civil rights statutes expressly address discrimination on the basis of race, color, sex, religion, disability or national origin, they do not explicitly include sexual orientation or gender identity and, as a result, LGBT students and parents have often had limited legal recourse for this kind of discrimination.