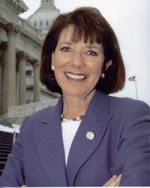 March 25, 2012 (Washington, D.C.) -- Congresswoman Susan Davis (D-San Diego) moved to make sure adequate resources are available for a strong enforcement mechanism to protect consumers. Davis and 98 of her colleagues sent a letter to House appropriators urging robust funding for the Commodities Futures Trading Commission (CFTC).  The CFTC is charged with regulating Wall Street, which includes speculation in the oil markets that are driving up gas prices.
“Having a cop on the beat means nothing if the tools and resources aren’t available to enforce the law,” said Davis. “We know what happens when Wall Street is left to its own devices.  We need an entity that will protect the American consumer from some on Wall Street who simply want to game the markets to make big bucks.”
Congress gave the CFTC new authority to oversee the speculation in the oil markets. Recently, speculators have taken advantage of Iranian threats to block oil shipments to increase volatility in the markets and help drive up gas prices.
According to the CFTC, speculation in the oil markets accounts for 20% of the price of gas.
The letter asks appropriators for $308 million for the CFTC to ensure that it has the resources to fully implement the regulatory authority granted to it by Congress.