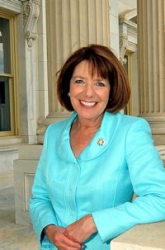 January 31, 2013 (Washington, D.C.) – Congresswoman Susan Davis (D-CA) re-introduced one of her hallmark bills, the Universal Right to Vote by Mail Act (H.R. 376), which would end restrictions many states impose on a person’s ability to vote by absentee ballot.

Currently, 21 states restrict an eligible voter’s ability to vote by mail, also known as absentee.  The other states, including California, offer no-excuse absentee voting much to the great satisfaction of many voters and elections officials.  Davis’s bill would prohibit states from limiting absentee voting to only certain voters and would allow all eligible voters nationwide to vote by mail for any reason in federal elections.

If someone can’t make it to the polls and wants to vote absentee, some states require a doctor’s note, the details of a religious obligation, latest pregnancy status or details of a vacation destination.  Attending to a sick loved one can sometimes be considered a valid reason, as long you provide the name of the person in need and the nature of their illness.

Justification for the required excuses can all be part of the public record and does nothing to increase election integrity.  Other states require a notary signature, even for students, which essentially amounts to a poll tax.  In some states, work does not even count as a valid excuse.   With one clear step, Davis’s bill would eliminate these antiquated and unnecessary restrictions.  It would level the playing field and eliminate needless paperwork.

“There’s really no excuse for the government to demand the private details of a person’s life just so they can vote,” said Davis.  “Voters should not have to put their life on display or jump through hoops just to participate in one of the most hallowed acts of a democracy – voting.  And no one should be denied the chance to vote because they don’t have the proper excuse.  This is not only a matter of privacy but fairness.  Voters in one state or in one group should not be denied a privilege that voters in other states and groups have when voting.”

The Congressional Budget Office estimates that Davis's bill would not cost the federal government any money.  The bill has twice passed the House Administration Committee. Davis will continue to try to move it forward through Congress.