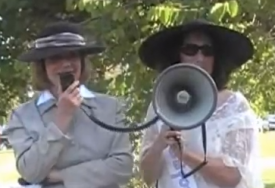 “I don’t think any of us would have thought that we’d be fighting the kind of extremist legislation that we’ve seen in the last two years,” she said.  View video:  http://www.youtube.com/watch?v=NzyDO6l9VJU&feature=em-share_video_user

She also denounced voter suppression efforts, which she called “chilling.”