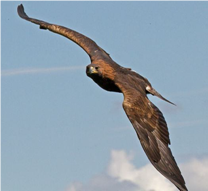 September 26, 2014 (San Diego’s East County)--Protect Our Communities (POC) and backcountry landowners have filed a lawsuit this week against the U.S. Bureau of Indian Affairs (BIA) and Department of the Interior (DOI) in U.S. District Court for the Southern District of California.

The lawsuit alleges that the federal government’s decision to approve a lease for Phase II of the Tule Wind project violates federal environmental laws, threatens the lives of San Diego County’s Golden Eagles and other migratory birds, and ignores the expert guidance of the U.S. Fish and Wildlife Service (FWS) and California Department of Fish and Wildlife (CDFW).

“San Diego’s majestic Golden Eagles are already in trouble, with their population predicted to drop by half to only 25 breeding pairs,” said Kelly Fuller, POC’s Executive Director.

She added, “The last thing San Diego’s Golden Eagles need are whirling blades near their nests and where they are soaring with the wind. We’re suing today because the U.S. Fish and Wildlife Service repeatedly warned the BIA that phase II of the Tule Wind project would kill eagles, but the BIA scorned Fish and Wildlife’s requests to change turbine siting on the ridgeline or move the project entirely.”

Last month the U.S. Fish and Wildlife Service (FWS) again recommended that the project be redesigned or moved to another location, when the FWS rejected Iberdrola Renewables’ application for a permit to kill eagles legally for up to 30 years at phase II of the Tule Wind project. In its rejection letter, FWS said the entire Tule Wind project posed a high risk to eagles with low potential to avoid or mitigate impacts and that the company’s eagle mortality estimate doesn’t accurately reflect risk to eagles. FWS asked Iberdrola to resubmit its application, this time including the entire project and more eagle data covering a larger area of the project’s footprint.

“Seeing eagles and other wildlife is one of the reasons why Californians visit San Diego’s mountains. Local businesses, the Cleveland National Forest, and other cherished public lands benefit from that wildlife tourism. We need to protect wildlife in order to keep people coming to the mountains and spending the tourist dollars that sustain San Diego’s public lands and mountain communities,” said Nica Knite, a local business owner who is a plaintiff in the lawsuit.

It is POC’s understanding that the Tule Wind project does not currently have a Power Purchase Agreement. In 2013, San Diego Gas & Electric (SDG&E) became a party to litigation when it tried to

cancel its Power Purchase Agreement for a wind project in Montana, reportedly because SDG&E believed the project’s developer concealed important information about the project’s risk to eagles and other birds.

“The Tule Wind project just doesn’t make sense. We don’t have to choose between eagles and renewable energy. There are better clean energy alternatives that are less hazardous to eagles, such as rooftop solar and energy efficiency,” said Bill Powers, an energy expert who is a member of the POC Board of Directors.

Three letters sent by MGC on behalf of POC to the BIA explaining legal problems in the BIA’s approval decision and asking the agency to reconsider (January 29 2014, May 2 2014, September 16 2014). The letters contain dozens of documents obtained through the Freedom of Information Act from the FWS, CDFW, BIA, and U.S. Bureau of Land Management showing the project’s high risk to eagles and illegal decision making by the BIA.

To view copies of documents related to this lawsuit and the  chronology of the Tule Wind Project , visit the Protect Our Communities website at www.protectourcommunities.org .

Protect Our Communities is a nonprofit group with a mission to defend communities and nature in San Diego County, Imperial County, and Northern Baja Mexico from harmful energy projects and advance better energy solutions through advocacy and law.

SANDAG (The San Diego Association of Governments) is supposedly planning a study of local eagle populations. Wonder if they'll pay any attention to the threat posed by wind farms?
The project area is located in McCain Valley about sixty miles east of El Cajon on the north side of Interstate 8. The small community of Boulevard is nearby. I have camped and hiked in the area and it is a beautiful place between mountain and desert climates.
Right, it is (or used to be) beautiful. We were hiking there recently from the end of the road with the Canyoneers. Went to the spring. Some intermittent power poles and fencing there along the road now, scarring the landscape.
Where is it?