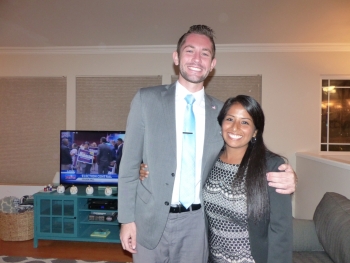 This was Santee’s first election since dividing the city into districts instead of at-large elections.

In district 1, Councilman Rob McNelis, a mortgage banking professional, has 56.32% of the vote and challenger Evlyn Andrade-Heymsfield, a software developer, has 42.68%, with 33% of precincts counted. In district 2, Councilman Ronn Hall, an insurance business owner, has an even heftier lead over SDSU program director Rudy Reyes, 69.92% o 30.08% with 55% of precincts tallied.  These two challengers were endorsed by the Democratic party and by Preserve Wild Santee, a group that has been fighting to stop sprawl development in Santee.

District 3 is an open seat with no incumbent.   Santee Parks and Recreation Director Laura Koval, who is endorsed by the Republican party, has 60.21% of the vote with 22% of precincts counted.  Zack Gianino, a no-party preference candidate and college liaison also endorsed by Preserve Wild Santee, has 28.97% while retired manager Lynda Marrokal, the Democratic endorsed candidate, has 10.83% of the vote.

“Zack will be back in 2020,” Gianino told East County Magazine at a gathering in Santee.

On Election night, McNelis told ECM he attributed the lead among the three conservative candidates to "family values" prevailing. McNelis had support from numerous Republican officials across East County as well as from the firefighters' union.

Van Collinsworth, lgeographic director of Preserve Wild Santee, voiced disappointment in the outcome  on election night and skepticism that winners would honor campaign promises and refrain from approving Fanita Ranch, a proposed 3,000 homes development, until a ballot initiative in two years can give the people a vote on large projects beyond the scope of the current general plan.

"Unfortunately, Santee residents have missed a great opportunity to elect fresh new candidates that would fight the SDG&E monopoly, fight traffic congestion from over development and work to protect Santee’s quality-of-life," he wrote in a statement later sent to media. "I stated during the campaign that the election was about Resident versus Building Industry control of city government. Unfortunately, voters (knowingly or unknowingly) chose Building Industry Association backed candidates [Hall and McNelis] or didn’t bother to go to the polls," the environmental leader said.

Collinsworth praised the new candidates in districts 1 and 3 for running positive, issue-based campaigns, adding, "Evlyn and Zack are great examples for both the young and old members of the community. They stood strong with exceptional commitment and integrity. Rudy Reyes also ran a positive campaigning and should be commended for offering to serve in District 2. Well funded Building Industry distortions and wedges are not easily overcome," he concludes, adding, "The challenging candidates gave Santee a real choice in a competitive election and deserve our praise for doing so."